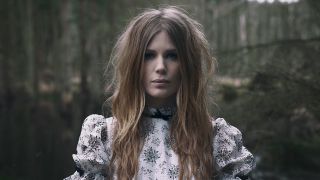 Myrkur’s new album, Mareridt, is the hottest new album in metal. But just as her stock is rising, a podcast interview with Zombitrol from May 2016, has embroiled her in controversy and accusations of Islamophobia.

In the interview, Myrkur aka Amalie Bruun, made comments about the way Islam treats women, saying “I think that it sees women as lower than a cockroach. That’s more frightening to me that that’s accepted as a religion than some music genre.”

As the interview goes on, interviewer Andrew Epstein suggests that there are Muslims who live in Denmark who maybe aren’t hardline, instead opting to celebrate the holidays etc.

“I don’t know them, but I’m sure they sure they exist,” responds Amalie. “How many billions of muslims are there? But that’s unfortunately not what’s invading Europe right now. We don’t see that, we don’t see the beautiful, traditional, cultural side. At some point you have to stop defending the religion.”

We reached out to Myrkur herself to clarify those comments. Here’s what she had to say…

How has your experience of religion shaped you and your attitudes personally?

“In my home country, Denmark, we are not very religious and it is not acceptable to mix state and religion. Politicians do not swear on the Bible or say, ‘Thank God’, and if they did, the majority of people would not take them very seriously. I am interested in spirituality, nature worship, paganism, the individual human, equality of all and not in collectivism or organised religions with laws. I care about Mother Earth and taking care of each other, and less about following a book of rules. But to each their own; religion and faith is a very personal thing.”

Some time ago you made some controversial comments about Islam that came across as borderline xenophobic. Can you clarify exactly what you were trying to say?

“A year and a half ago I did an interview, which is what you are referring to now. We talked about what I consider to be a real and important issue for women today: religion and how certain organised religions treat and view women. I used Christianity and Islam as the two examples of current religions that I would consider more problematic in terms of female empowerment, something that is very important to me and that I fight for every day of my life.”

When you said you felt that Islam was ‘invading’ Europe, what were you trying to say? Many Muslims have grown up in and contributed positively to societies across Europe.

“Many Muslims have grown up in and contributed positively to societies across Europe; I agree. In Europe we have freedom to choose religion and you do not get persecuted for having the wrong religion, so of course it’s open to all and should remain that way.”

Can you see why some people would take those comments as Islamophobic or even racist?

“I don’t understand why you are bringing up skin colour here? I think it is misleading at best, and dangerous at worst when journalists are not able to separate religion and race, in a discussion about religious views on women. No-one chooses their skin colour and we are all human and we all bleed the same colour. No one is born a Christian; not even Jesus Christ.”

Does your attitude towards Islam differ to how you feel about any other religions in particular? Why if so?

“No, but the more laws, the more restrictions for women/LGBTQ+ people, the less I probably have in common with a religion. That being said, I am always interested in learning and expanding my horizon, so anyone who can teach me more about different religions and why I am possibly wrong about them, I welcome!”

You seem to attract a lot of white supremacist followers judging by comments on your videos etc. What do you think of those people? Would you want to distance yourself and your music from that scene?

“I haven’t seen white supremacists on my pages, but I think I have at least alienated them with my Instagram post condemning their presence at the Charlottesville rallies. I don’t really think the type of people you’re referring to like a woman who’s doing what they consider a man’s job; writing and performing within metal. Ever since I released my debut in 2014, I’ve been attacked, abused, and received death threats from the type of person you’re referring to – who, for some reason, claim to own metal.”

What do you think? Is Myrkur right to question Islam’s attitudes to women? Or are we more sensitive about negative comments about Islam than we are about similar comments towards Christianity?

Listen to intense and beautiful new track from Myrkur