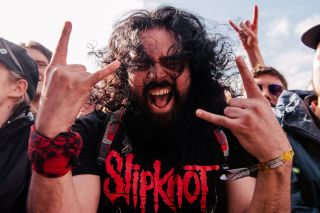 This year's Download Festival, dubbed Drownload, was hit by some of the worst weather in years. That didn't deter fans though, with thousands of metalheads braving the rain and wading through the mud to enjoy the likes of Def Leppard, Rob Zombie, Slipknot, Slayer and Tool.

With Slipknot's first UK show in years, Tool's first UK show in over a decade and Slayer's last ever UK show there were understandably many reasons to brave the god awful conditions and more than enough highlights to make the weekend truly memorable. This was a Download for the history books, and here's why...

It's almost inconceivable that Whitesnake's long reign may be approaching its conclusion considering both David Coverdale and Tommy Aldridge are eyeing 70. Yet the good times are still hers to be celebrated, as The Cov gets a field of people gleefully singing along to Slide It In, while giving spectators of all ages, genders and persuasions a funny feeling in their loins with that iconic croon.

Plus, Def Leppard's Hysteria played in full had far too many grown men donning wigs and rather explicitly squeezing themselves into their girlfriends' most outlandish leggings.

Swing Of The AXE!

It’s imperative that Download give a young and hungry metal band a big slot on the mainstage. They couldn’t have picked a better one than Powertrip to rep for this generation. The Texans decimated early afternoon on Saturday, and when they threw out their most recognisable song – the grooving, thrashing beast that is Executioners Tax – two tracks in it was some sight to see the jaws of every curious Slipknot fan hit the floor. Game. Set. Match. SWING OF THE WOW!

A Behemoth of a show

Behemoth repped extreme metal right on the motherfucking main stage and the gigantuan crowd loved every second. They proved that black and death metal have an important place at Download, and with such a great turn out and reception from the punters, perhaps next time they'll be playing a little further up the bill!

They also promised to do Hammer Smashed Face if Download have them back next year. Which we’d totally like to see.

Many an eyebrow was raised at the oddball South African duo being announced as subheadliners to Slipknot, with no shortage of moaners on various sites and messageboards insisting their mix of trashy hip hop and hard trance has no place at Donington.

Except, when push came to shove, Die Antwoord not only drew a massive crowd, but had people dancing, moshing and crowdsurfing their baps off, the likes of I Fink U Freeky and Baby’s On Fire dragging an initially bemused crowd into raving raptures.

It’s Clown’s job to cause mayhem, hitting his barrels with fury or hanging off his drum platform while it rises, all while wearing his unnerving mask and being the kind of guy who should never, ever do children’s parties.

But for Download this year, he’s brought something else - a fucking flaming baseball bat. It only makes a brief appearance but it rules. More of those, please.

Shout out Amon Amarth. Seriously: what other bands are going to bring you steam cannons, pyro, flaming effigies, a giant Viking helmet and a fucking DRAGON in the middle of the afternoon? It was another triumphant conquest from one of metal’s most beloved bands

It was a lovely surprise to see Asami from Lovebites join Halestorm onstage to sing Love Bites (So Do I).  A hard-hitting pairing of standout front-women for one of Halestorm’s biggest hits. Interestingly, as Lzzy Hale revealed, Lovebites actually named themselves after the song...

The Pumpkins seemed genuinely touched to be making their Download debut, James Iha even referencing a Donington Monsters Of Rock CD he had as a kid. But it’s a surprise when Myrkur comes out to sing Snowblind with them, lending a frozen, Nordic dimension to lines like ‘icles within my brain’. As she’s pregnant, her unborn child might be the youngest person ever to go onstage at Donington.

Slayer will always energise the most atavistic part of your brain, but they clearly hit the motherlode with one guy in the crowd, transformed into a 6 1/2 ft gorilla headbanging like a motherfucker.

The only thing more in keeping with the spirit of Slayer would have been a tussle with one of the T Rexes that traditionally stalk the Donington grounds.

For those who have waited 13 years to see it, just the moments leading up to Tool taking the stage on Sunday night felt genuinely charged. Rarely has Donington Park had such a crackle in the air as tens of thousands of people counted down the seconds for one of the most eagerly anticipated returns in the history of music.

Like a marathon runner laying eyes on the finish line, we were finally about to be rewarded. The fact that once they got up there the wait felt justified is all the more impressive.