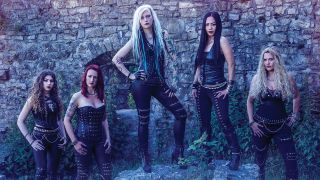 Sounds Like: Pulsating, heavy metal blood and thunder fit to slay dragons with

Good things are happening fast for these five metal banshee wonder women, who first came together in 2015 to shake the foundations of their pretty hometown of Brugg, Switzerland, with their exuberant, galvanised take on denim-and-leather heavy fucking metal. Burning Witches’ stellar, steel-plated second album, Hexenhammer, follows a vinyl live EP earlier this year, but the urge to action had long been keenly felt by guitarist Romana Kalkuhl. Their story is scrawled onto the parchment insert of their 2017 vinyl debut: “Once upon a time, a lonely witch was about to fulfil her dream of an ALL-FEMALE SWISS HEAVY METAL BAND and started to search for more wicked ladies…” The vision was clear, and standards were high, yet it was purely by chance that Romana stumbled upon her ideal creative partner-in-metal, vocalist Seraina Telli.

“I was watching a concert where Romana was playing with her band Atlas & Axis, and after that it was a little bit magical,” Seraina recalls with a chuckle. “She came straight over to me and we started to speak, and I said I was a singer. It just came; we had that flow from the beginning. With Romana it’s the first time I’ve had this sort of team together and it works very well, she has all these ideas, we’re always thinking about what’s good for the band, what’s good for the music.”

The music, of course, is fist-pumping 80s-centric heavy metal like mum used to make (if your mum was Doro), but when asked how old she was when she got her first taste of steel, Seraina hesitates.

“Sadly, it was not so early,” she admits, “because I like 80s music, and I’m a 90s child! So I grew up with pop, but I always wanted to listen to more aggressive music, and I was searching for things I liked. Then in my early 20s I discovered Judas Priest – it was Beyond The Realms Of Death, with that guitar intro, and Rob’s voice… I was like…” Seraina gasps. “Wow! I was newborn! Ha ha ha! It was very important for me to discover this band, and bands like Iron Maiden. I heard these singers and I said, ‘That’s the way I have to sing!’”

Although her vocal focus came relatively late, Seraina has been obsessed with the discipline for as long as she can remember.

“I always wanted to be a singer, it was a childhood dream or something, but I never expected that I really could do it,” she confesses, “I just wanted to do music always. Music was always a part of me – my father is a musician, my mother was always singing, my grandparents did theatre. But I was just working normal jobs, I was a hairstylist, and one day I said to myself I had to do music, so I went to music school, and from that day I just did music.”

Seraina and Romana both have prior experience in more contemporary-sounding bands, but what is it about the decade of spandex and legwarmers that proves so seductive?

“I think it’s sad today because so much music is not handmade – they have so many backing tracks onstage,” ponders Seraina. “I was always wanting to do real music, playing everything live, more the old-school way.” To help them in this regard, Burning Witches secured the help and support of a bona fide 80s metal legend, Destruction frontman Schmier, who produced both albums. “Working with Schmier is great: he has a huge know-how about metal, he knows the whole scene, he can help us with things like labels, because it’s not easy! I met him first in the studio, so I was pretty nervous – my first time recording metal and Schmier came, too! He’s a very funny guy, we have much fun together. He’s friends with Romana, they’ve known each other for years. She wrote to him saying she wanted to do an all-girl metal band and I think that was interesting for him!” Seraina laughs. “So when she showed him the first songs, he was with us.”

Hexenhammer – the German name for the medieval witch-hunting manual Malleus Maleficarum – suggests that the persecution of witches is a concept that’s set to run through the band’s career, but Seraina notes that they have plenty of scope for using the theme to comment on aspects of modern society.

“I would say, whether it’s witch-finding or racism or something, it’s always the same, it’s humans reacting. With the Hexenhammer, it was such a brutal time; more than 60,000 people died because of this book, and I think today we’re in a weird time again, racism is growing. It always happens the same. We have to stop that, we have to be smarter now! The Hexenhammer was from Germany, but it affected Switzerland and Austria, so it was very close to us. That’s why we connected with this book and those stories.”

And how is Switzerland for heavy metal in general these days? “We have a good scene here,” the singer asserts. “It’s not that popular, it’s more underground, but we have many places for concerts and many people who come. We stand all together, it’s a good feeling.”

Asked for the highlight of the band’s career so far, Seraina’s reply is instant: “For us, for sure the highlight is that we all found each other,” she gushes. “We had a very good mood together right from the start. We have to work hard together, but we are very good friends; we go out eating and shopping, and after a band session we always go for a drink. It’s not just a band, it’s like a whole family.”

Hexenhammer is out now via Nuclear Blast