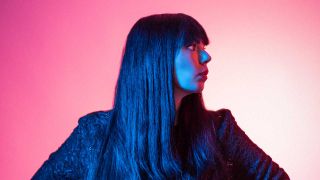 Tell A.A. Williams how affecting you found her self-titled debut EP and she’ll respond with a such a genuine flood of gratitude, humility and relief that it’s almost disarming. She should be used to this by now; in a very short period of time, she’s been signed to Holy Roar Records on the basis of a few demos, contacted by a top-end booking agent, and asked to play the prestigious and revered Roadburn Festival next April as part of a label showcase there.

“I just didn’t even contemplate any of this,” she admits. “I was thinking a few reviews on YouTube would be great, but a lot of stuff happened very quickly, which has been fabulous. You could never dream of it, really, because you’re a bit frightened to in case it didn’t happen.”

It’s just that sense of trepidation, yet experienced at a transformative, psychological cusp, that suffuses the four tracks on A.A. Williams. Throughout Control’s funereal piano shifting time onto a more nocturnal gear, to Cold’s hallowed undulations and Belong’s hushed cadences, Williams’ slumbering, airy croon has a habit of lulling you into a dislocated, fluid yet hyper-aware state, a space outside of everyday parameters.

“My mum listened to Control for the first time, and the word she used was ‘dreamy’,” A.A. laughs. “I thought, ‘OK, I get what you mean.’ I hadn’t envisaged that but I can understand why she thought that. I’m not really one for cramming loads of stuff on just for the hell of it. I think everything has to be very delicately chosen. There’s quite a lot of calculated choices being made. It’s not a case of just putting stuff on and seeing what sounds nice. I come from a classical background, so I have a kind of meticulous approach, and I’m very mindful not to do certain things, and you end up with a spacious sound coming from that.”

The EP isn’t just a head trip, it’s an intimate emotional journey, too, the honesty and the vulnerability of the songs also contributing to the fully fledged world so vividly (if languidly) brought to life throughout its mere 20 minutes.

“I think it’s a brave thing to do,” says A.A. “but you have to take risks if you want people to take it seriously and be interested. You can’t just give them a half of you, you have to give them as much as you can afford to, so they can take something positive from it.”

None of this, of course, sounds like your typical Holy Roar fare, but for A.A. approaching them was a natural, if counter-intuitive choice, having fallen in love with them after her musical path took her from classical music to discovering Spineshank as a teen, and then the likes of Cult Of Luna and Amenra – both bands who came from a hardcore background and took what was initially thought of as a static genre to the most far-flung and exploratory of realms.

“I approached them because I loved all the other bands that they have on the label, and always have done,” she says. “So I thought, ‘It might not be their thing, but I’ll send it and see what happens.’ I remember sitting in a little café in Shoreditch and I got an email from the head honcho, and I thought, ‘What, they’ve actually replied? This is not normal for the music industry in the 21st century!’ They wanted to do an EP, which was fabulous, and they were actually initially happy to put out the demos that I done, but I thought, ‘I can do better, come on, give me a chance.’ I’d already had a week booked into the studios, because I self-indulgently thought, ‘Oh, maybe I’ll go and do stuff’, and I thought, ‘Brilliant, I’ll use this!’ So I went away and came back with that EP.”

Like peers such as Chelsea Wolfe and Emma Ruth Rundle, or bands such as Wovenhand, A.A. Williams’ music might not be metal by any stretch, but as the Roadburn invite attests, there’s a spiritual sensibility and a willingness to travel to the far edges of personal experience that devout lovers of the riff can fully relate to.

“I think there is a misconception that heavy equals loud,” she says. “To me, it’s more about the pace, and if you have guitars and low tuning and the texture, it gives it that weight, even though it doesn’t have to be loud to do that. That slow, slightly behind-the-beat, lilt pace. I think that has as much weight to it as if I just stuck on loads of pedals. That’s the thing you get with Cult Of Luna or Amenra; you get that weight even though the textures are often gentle.”

It’s that particular kind of weight that has the effect of taking you out of yourself, and into the kind of mental space where true change can occur. That potential of the songs is reflected in the EP sleeve well, its cold colours and wintery landscape harbouring a blazing sun masked behind the clouds.

“I think there is definitely positivity in each song,” A.A. reflects. “I don’t think any of them are just five minutes of pessimism; they build, they become more beautiful and more intricate, and then they explode in a positive, expansive kind of way. There’s an elation that I associate with it, and that’s one of the reasons I’m so excited about it live, because you have the added bonus of physical volume, so the ending of Control can be absolutely massive.”

What is she hoping for from her first outing with a full band at Roadburn?

“Secretly I’ve been dreaming for a little bit of crying, along with my other dream of people who finish the album lying on the floor cuddling the album sleeve. I also secretly dream that if someone might have had a shit day, they might listen to this on the way home and will have to pull over for a bit of a cry on the A1. I can respond quite emotionally when I listen to music, and I definitely have been on a bus sitting on my own listening to something on headphones and cried. I would love to command any emotional response from a crowd, because I would feel like I’ve succeeded a little bit. There’s no point in making music if people are just indifferent to it.”

A.A. Williams is out now via Holy Roar. She plays Roadburn on April 11-14