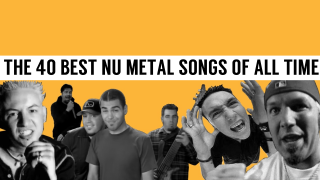 The turn of the century was a more innocent time. A time when spiky red hair, parachute jeans, band hoodies and shouting at our parents were all the rage, and the radio waves were filled with crunching guitars growling men with questionable facial hair arrangements. That's right – for us, the turn of the century will forever be synonymous with one thing, and one thing only: the reign of nu-metal.

Compiling this list has involved fights both in a metaphorical and literal sense, and we’re still figuring out how Apartment 26 didn’t get included. But, here, we present the best 40 nu-metal songs of all time.

There was a large amount of Latino influence in metal around the time and Ill Niño certainly had those elements in their songs, but on What Comes Around they shaved the rough edges down to create a sleek anthem of big riffs, DJ scratching and skyscraper vocals.

A UK pop-punk band crashing onto a ‘best of nu metal’ list? Oh yes! The thick grooves and aggressive stomIf there was an image that springs to mind for Christmas, it’d probably be Father Christmas chilling with some elves and snowmen and living the life on milk and cookies. If nu-metal had an image, it’d be Fred Durst in his backwards red baseball cap, doing the Rollin’ dance and surrounded by dancers doing it like we’ve all done a million times after too many double vodkas. Gloriously and wilfully obnoxious at all times and with a Greatest Hits selection that will take the party challenge with any band you want to mention, Limp Bizkit will always be the jewel in the nu-metal crown.rollp of Nothing has much more in common with the mighty Limp Bizkit than to Blink 182.

Where would this list be without a nu-metal ‘80s cover version? The gender-bending Jonathan Davis-approved mob got in there first by cranking up the riffage on this New Order classic. This paved the way for Godhead’s Eleanor Rigby. Cheers for that.

Ultra-political rap rockers of Irish, Gibraltan and English descent singing about downtown LA really shouldn’t have worked, but South Central was an instant mosh‑ready anthem for the masses.

For all of the crowing about Limp Bizkit’s cartoonish approach, Kid Rock dicking around with a dwarf in a Stetson and everything about Coal Chamber, nu-metal did occasionally produce something that deserved critical gravitas. System Of A Down packaged the apocalyptic rage of Jello Biafra, club-ready nu-metal bounce, a fierce political agenda and Eastern influences to create a sound that hadn’t been heard before or replicated since. Everything System Of A Down ever did was pulled off with integrity, class and conviction. Nearly 15 years later, we still want a new SOAD album.

Deftones were nu-metal’s most scathing and yet fragile band. On My Own Summer (Shove It), they stretched their musical dynamics to breaking point. The ethereal verses brilliantly accentuate the paint-stripping roar of the chorus.

“When this riff comes on, you instantly recognise the band and the song, and you’re filled with the energy and memory of when you first heard it," Chelsea Wolfe told us in 2018. "It’s definitely that way for me, especially since Deftones are hometown heroes for the Sacramento-born-and-bound.”

On the verge of becoming MTV darlings, Incubus flexed their mainstream muscles with this laid-back, lovelorn, semi-acoustic effort that showcased Brandon Boyd’s vocal prowess, rather than just his six-pack.

The out-of-the-gates success of Hybrid Theory made Linkin Park a household name from the start, setting the band off on a roll that would see the album become one of the biggest selling rock albums of the past 20 years. Was it metal? Well, you couldn’t put them on at Wacken, that’s for sure. It’s definitely the closest to pop music that metal has ever become, but to deny the songs that could still make 80,000 people at Donington lose their minds 15 years on would be nothing short of ridiculous. Don’t be ridiculous. You dick.

Turn Me On "Mr Deadman” is definitely a nu-metal anthem. With that amount of bounce, how could it not be? But this rager certainly owes more to Rob Zombie and Marilyn Manson’s industrial stomp than it does to Limp Bizkit’s big-shorted shenanigans.

They came up through the industrial metal scene but New Disease is not the sound of clunking machines. It’s catchier than bird flu, bouncier than a helium-filled Mr Blobby and should have made Spineshank stars. Alas.

29) Evanescence – Bring Me To Life

A huge goth-tinged floor-filler that turned little Amy Lee into the biggest female rock star of the 21st century (at least until Hayley Williams showed up). What happened to the rapping bloke? No idea. Tough break, bro.

You can blame America for this one. While in jolly ol’ England we largely ignored Saliva, this song still ignites nostalgia-fuelled mayhem on dancefloors across the States. Those wacky Americans, eh?

Metal has always been a refuge from which you draw strength: some of our most iconic and powerful moments were birthed from heartbreak, pain, rage and frustration. No one knew that feeling more than Max Cavalera in 1998, as he reeled from the loss of his stepson, Dana. He wrote this to pay his respects to his late stepson.

It was enough to push Bleed into the kind of emotional, urgent territory from which great art is made, but there was still something extra-special to sprinkle on the top of the noise. The addition of Limp Bizkit’s Fred Durst and DJ Lethal would give the song an added hip hop swagger. What happens when a thrash legend ropes in the most recognisable figurehead in rap-rock for the lead single on his long-awaited new band? Answer: all of the shit gets lost.

Frontman Lynn Strait might have tragically died in a car accident in 1998, but his legacy lived on in this dancefloor filler and nu metal classic. The first track from Snot’s only album with him, Get Some, it shoved his talent and attitude in your face. Yeah, the funky wah-wah guitars and punk rhythms are great, but it’s the energy of Strait that really made Snot something special.

Not a nu-metal song? We beg to differ. In an era of rockers going rap, it was refreshing to see some rappers doing rock. Frankly, if it's as good Pharrell and co. managed on this classic track, we’re bang up for hearing Stormzy’s nu-metal side project.

Did you listen to the songs or was your judgement blinded by the neon orange tracksuit and the mental video for From This Day? Nu metal Machine Head ruled. This tune slams. Get over it.

Before they became Red Hot Chili Peppers-aping hippies, Incubus were an eclectic mix of funk, punk, thrash and dub. Listen to this rager and despair of what became of them.

A ragtag collection of skaters, stoners and freaks, Hed PE excelled in celebrating nu-metal’s excesses with this gangster-strutting romp about hard partying, sweet loving and heavy rocking. Not a straight-edge anthem.

Taproot bucked the trend of macho chest-beating with a slightly more restrained and thoughtful approach to rap-infused metal. Again And Again is as big in chorus as it is in brain and musical invention.