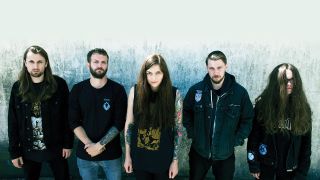 Conceptually, death metal isn’t the friendliest of subgenres. Lyrics and artwork are littered with imagery of decapitations, mutilations, and sexual violations, the latter of which is usually aimed at women. Depictions of rape and assault are rife in the world of extreme music, and one band is aiming to turn that convention on its head.

“I know quite a few women that have had experiences with rape, and I know bands that write about raping women, so I felt like I can write about taking revenge, and force-feeding rapists their genitals to turn the tables,” says Larissa Stupar, vocalist for southwestern noisemongers Venom Prison, candidly. Larissa is talking about her band’s new song, Perpetrator Emasculation, which also forms the basis of their debut album cover, Animus, keeping in convention with the gnarly art of death metal legends like Cannibal Corpse.

“Animus deals with oppression and politics, and to this day sexism and misogyny has a big impact on our culture – even in metal and punk,” says Larissa. “I can totally understand why these lyrics are a part of the art because bands just want to be extreme, but we need to consider that we live in a society where stuff like that is normal and an everyday life for some people.”

As you might have guessed, Venom Prison aren’t your average death metal band. Based in South Wales, Larissa is originally from Russia, but moved to the UK for university, and knew the rest of the band from her days gigging and touring in Germany with Wolf Down. Featuring former members of Brutality Will Prevail and More Than Life, there’s more than a little hardcore ethos in what the band do, but Larissa’s barbaric roar and crunching guitars are as menacing and metal as they come.

“We all just grew a little bit bored of hardcore and wanted to do something that brings us forward as artists and as people,” she reveals. “Hardcore is very limiting because it’s very cliquey and people support bands they think are cool even though they’re not very good, but stuff like that doesn’t happen in metal. People don’t really care who you are, they just like your music.”

And musically this might be one of the best debut albums of 2016. Animus is a cast-iron battering ram of brutal blastbeats and Slayer-esque riffs, all glued together with Larissa’s lacerating vocals and gallons of groove. Ideologically, too, this isn’t a band just out to create turbulence for the sake of it; Abysmal Agony tackles the topic of mental health, Corrode The Black Sun is about fascism, and Celestial Patricide turns the crosshairs to religion, “because if we think there’s a god in the sky then we’re all slaves.” And in a world as fucked-up as ours continues to become, bands like Venom Prison are as vital as ever. Say hello to the new faces of extreme.

Animus is out October 14 via Prosthetic