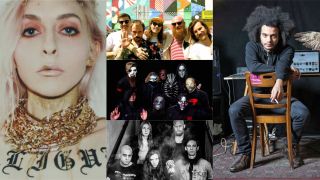 As the decade comes to a close, it feels like a good time to look back over the last ten years and try and assess exactly how this period will be looked back upon in the world of rock and metal.

It’s no easy feat. The 2010s feel like a pretty confusing decade to accurately sum up. The massive mainstream success of rock in the 80s, and the bizarre stylistic turns of the 90s, are almost universally fondly recalled. The 00s, though full of polarising genres and acts, is still seen by many as a time of great innovation, and a return to the core values of the scene to others.

On the surface, this last decade can’t compete with those legacies. It's been the time where rock has slipped way behind hip-hop, EDM and alt-pop as the dominant zeitgeist genre of choice. But despite all this, dig a little deeper and there is more to be positive about than it might seem on the surface.

Let’s get the depressing stuff out of the way first. It’s undeniable that rock music has never been more insignificant in the wider world as it has become this decade. One look at the top 20 streaming artists on Spotify will reveal that there isn't a single rock band present – in fact, you have to scale out to the top 50 to find something resembling ‘rock’ at all. The fact that it happens to be Five Seconds Of Summer, who are rock in the loosest sense of the word if you squint really, really hard, should disturb anyone who cares deeply about the genre.

Rather than new blood, the rise of nostalgia and reunions have become been rock's big, news-defining moments. Only one metal band has risen to the pinnacle of festival headliner in the UK in this time, and the polarising reaction to the announcement of Avenged Sevenfold’s place at the top of Download’s bill in 2014 – just months after they topped the charts on both sides of the Atlantic simultaneously with their sixth album – is indicative of the kind of cannibalisation of our scene that has depressingly continued to rise over the last ten years.

It’s also been startling to see the lack of evolution – or the idea of what evolution means – by the bands that were tipped to take those slots back around 2010. This decade has seen many bands jump from rock's ship and embrace pop music in order to reach arena levels. Paramore, Fall Out Boy, Bring Me The Horizon and Bullet For My Valentine have all released albums in this period that are cleaner, nicer, prettier, more easily palatable and almost unrecognisable from the material that made rock fans excited about them in the first place. That’s absolutely their prerogative, of course, but it is a worrying trend that so many younger acts clearly feel that staying rooted in rock and metal can no longer take them to the places they want to go, both commercially and artistically.

We really could have done with those bands replacing the many legends that have passed away during this period. We all knew deep down that rock stars were just flesh and blood like us, but it’s been brought sharply into focus over the last ten years, and will inevitably only get worse as time continues to relentlessly march forward. David Bowie, Lemmy, Ronnie James Dio, Chris Cornell, Ginger Baker, Chester Bennington, Peter Steele, Scott Weiland, Paul Gray and Gary Moore are just a handful of high-profile names that passed away this decade; a decade that brought rock's mortality sharply into focus.

If all this seems a bit depressing, don’t worry: the flip side to this is that, although the mainstream has no idea of it, rock music's retreat back into the underground has arguably become its artistic saviour.

As the commercial appeal of rock, punk and metal has diminished, so these genres have blossomed artistically. It's almost as if the idea of mainstream success is so unlikely that artists might as well indulge themselves and take as many risks as they see fit. And, for those that are paying attention, it’s arguable that we’ve never had a more diverse, more musically dexterous and more daring scene than the one that we have right now.

Some truly, genuinely original records have been made in the 2010s, and, most hearteningly of all, these creative flights of fancy seem to be being embraced by more and more people. Albums like Daughters' staggeringly bleak You Won’t Get What You Want, the fragility and catharsis of Oathbreaker’s Rheia, Lingua Ignota’s harrowing neo-classical revenge fantasy Caligula and Fucked Up’s hardcore rock opera Dose Your Dreams have all taken rock's tropes and standard forms, deconstructed them, and then rebuilt them as something new, unique and unheard. All have seen their profile rise in the aftermath.

Extreme metal is thriving – the success of Behemoth in the early 2010s surely playing a part in exposing more and people to black and death metal. The strides made by the likes of Watain, Cattle Decapitation, Full Of Hell, Deafheaven and Zeal & Ardor have given this most intimidating of styles an entirely new, fresh and larger fanbase.

Hardcore, another genre that has never truly been a mainstream concern, has been embraced by a far wider demographic than previously. Much of this has to do with Code Orange and their boundary-obliterating Forever album from 2017, but the likes of Knocked Loose, Harm's Way, Show Me The Body, Vein and Stray From The Path have all turned heads as well.

Britain’s scene has also been in rude health for much of this period. Lower Than Atlantis and Marmozets kept things ticking over during the first half of the decade, but from 2015 onwards there have been so many fantastic records coming from this island; Black Peaks, Venom Prison, While She Sleeps, Dinosaur Pile-Up, Puppy, Employed To Serve, Milk Teeth, The Xcerts, Palm Reader, Hernameiscalla, Nervus, Tesseract, Conjurer and Jamie Lenman have all released blinders. Add that to the prosperity of Creeper, Frank Carter and The Rattlesnakes and, maybe most importantly of all, Idles in breaking through to a wider audience, and it really is halcyon days to be a British rock fan.

Expanding on that theme, there are a few bands that have dared to go for arenas without compromising their art or explicitly courting pop sounds and have seen their single-mindedness repaid. Sabaton and Amon Amarth have both taken the deeply uncool aesthetic of classic heavy metal into sizeable rooms. Architects have become an arena band with their hugely challenging and emotionally open tech-metal. Parkway Drive dropped standard metalcore and instead decided to meld Iron Maiden, Nick Cave and Rage Against The Machine, and aren’t too far away from becoming festival headliners. Ghost continue to embrace the macabre, the gothic and the arcane with no sign of their ascent slowing down.

It seems to have inspired some of the bigger names in our scene as well. This year alone Korn, Tool, Slipknot, Biffy Clyro and Rammstein all released excellent new albums, seemingly aware that sleepwalking their way to retirement isn’t going to cut it anymore. And the number one albums achieved by Bring Me The Horizon, Slipknot, A7X, Black Sabbath and Iron Maiden in this country suggest that when we all unite we can still have an impact in the wider world.

Overall, there's more to be positive than negative about when looking back at the last ten years. It’s unlikely that the mainstream will agree, and you can expect those ‘Rock is dead!’ think pieces to keep coming thick and fast.

But they’re looking without seeing. For those of us who have been paying attention, who truly care to look, the 2010s has been a decade to remember.