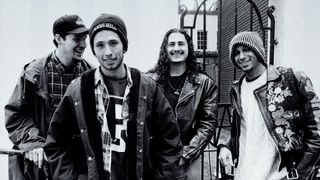 Few bands have had the impact of Rage Against The Machine. Their mixture of huge bouncing rock riffs, lucid hip-hop lyrical flow and furious political polemic was truly revolutionary when they first emerged in the early 1990s. And, even though they only have three albums of original material to their name, they’re behind some of of the most iconic and incendiary songs of the last 30 years. Here we present the ten best songs in their cannon.

It’s an obvious thing to say, but Killing In The Name is a pretty big deal. The dynamic push and pull between the verses restraint and the pay offs unrestrained ire and that oh so catchy, oh so quotable sloganeering, it’s some song. Its initial impact took rap-metal to another level, inspiring a generation of bands to pick up the metaphorical Molotov Cocktails and hurl them in the direction of The Man, then it got another, more unlikely, lease of life 17 years later, when a fan campaign sent it to No.1 in the UK. Rage have better songs, but none so significant.

Starting with the funkiest of bass solos from Timmy C, Calm Like A Bomb eases you in gently before Tom Morello’s guitar squeals and Zak De La Rocha’s best ‘Ol Dirty Bastard impression turns this cut from third album The Battle Of Los Angeles into a massive sonic head fuck. By the time we get to De La Rocha’s acapella whispered closing, the damage has been done.

Featuring an almost Smashing Pumpkins style opening riff from Morello before Timmy C’s bass takes the lead Down Rodeo is one of the most challenging songs Rage have ever composed. Making a mockery of the idea that they are a one trick pony in the process. It also features one of De La Rocha’s finest lyrical turns: _‘_I’m rolling down rodeo with a shotgun, these people ain’t seen a brown skin man since their grandparents bought one.’ Savage.

The Led Zep style jangling, clean guitar that ushers in Born Of A Broken Man shows that RATM had more substance than all of their bouncy rap metal peers. This takes the quiet/loud dynamic of Pixies, adds all manner of funk rhythms and cranks the intensity levels up a notch or ten.

If, as they claim, all of the noises heard on a Rage Against The Machine album are made by guitar, bass, drums and vocals then who the hell knows how they came up with the swirling, ambient opening to Revolver. But once that intro subsides it’s all about starting minimal and slowly building to a brilliantly angry climax. The amount that happens in the four minute running time almost makes this bordering on prog/post-metal.

While there are many reasons Bullet In The Head is held up legitimately as one of the greatest songs of its era, be it that skipping bass line that opens it or the way De La Rocha nearly rips his voice to pieces at the climax, the main one has to be that bewildering, spidery riff that takes us home half way through. Possibly Tom Morello’s finest five minutes.

Wake Up had been one of the less talked about songs from Rage’s debut album before it was used in the end credits of The Matrix. But its inclusion here has nothing to do with Keanu Reeves, and everything to with the unstoppable groove that sounds like a careering train and De La Rocha’s fastest, deftest ever vocal performance.

Bulls On Parade was the first song to be released from Evil Empire and, after a four year wait, brought sighs of relief from anyone wondering if RATM’s debut was a one off. With the bounce of a vat of flubber, all manner of mechanical wah-wah sounds being coaxed from Morello’s guitar and De La Rocha spitting venom, it was clear that this was a band who weren’t going to let their standards drop.

It used to be the song that closed every RATM set, until they swapped it out for the more high-profile Killing In The Name. But even a song as iconic as that can’t follow Freedom. The final song on the self-titled debut, if you weren’t already sold on the album as one of the angriest, most innovative records of many a year then Freedom gave you a reminder of everything you’d just heard in a six minute package. Hard hitting drums, lucid bass lines, unique and versatile guitar work and pure, screaming, unrestrained anger. Freedom is Rage in a nutshell.