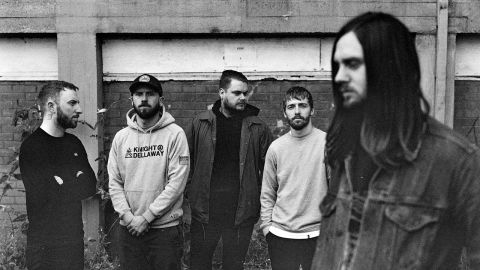 After three albums and one EP that have shown almost constant progression and  a total unwillingness to stand still, you may have thought that While She Sleeps had finally reached a point where they could settle into honing rather than reinvention on this, their fourth full-length. Then word from the studio finds them mentioning Daft Punk and Ibiza techno as influences on So What?, quickly disposing of that notion. So, what’s the deal here? Have WSS gone full EDM? While that is too much of a stretch, it’s fair to say that this is easily the most experimental and oddly challenging album the band have ever put together.

You may not know it from the start – opener Anti-Social sounds like classic WSS, a spidery guitar line from Sean Long gives way to a massive pummelling riff and Loz Taylor’s impassioned scream before the song soars off into the horizon with Mat Welsh’s melodic vocal hook. There is a little hint of what is to come  with a partially rapped  mid-section and an electronic siren effect at  the close of the song, but overall it’s familiar enough, and more reminiscent of the Brainwashed era, to ease you in to what’s about to come.

Because it’s at this point that So What? goes all over the place. Third track Inspire is driven by an electronic loop that genuinely could have been taken from any modern pop song of the last year. It’s a fairly bizarre thing to hear in conjunction with metallic hardcore riffs and barked vocals, yet, oddly, it actually works. Then there’s the title track’s Dinosaur Jr-esque shoegazing, alt-rock riff and, frankly, all bets as to where this band are heading are off.

It’s The Guilty Party, though, where things really get outside of our comfort zone. Yes, there is a whole load of chug; yes, there is a massive gang vocal with all the ‘Whoah-ooh!s you could ever ask for, but its hook is identical to 90s dance hit, Push The Feeling On by Nightcrawlers. No, this is no joke, and, yes, it’s almost impossible to get out of your head.

The one thing that has remained  a constant with While She Sleeps is the message. Almost consistently throughout So What? there are themes of social unrest, alienation and a very real and very palpable sense of anger and dread at the world these young men find themselves in. And no amount of sonic deviation can mask the obvious frustration that imbues this entire album. That being said, there are points where the band are happy to delve into their own back catalogue for inspiration, with songs like Elephant bringing heaviness and polish in unison, as they did on You Are We, or Set You Free (not a cover of the N-Trance 90s club banger, surprisingly) leaning on the ferocity of This Is The Six.

But So What? is characterised by its many leaps of faith, evidenced by the album’s highlight, Back Of My Mind, which features so many twists, turns, moods and genre nods that when Welsh turns full-blown grime, giving us a proper biting rapped verse towards the song’s end, you’re not even slightly surprised that you’re completely surprised. The album ends on the anthemic Gates Of Paradise, which chucks in cheerleader chants, piano and a cello outro for good measure, and, such is the dizzying array of sounds you’ve just been subjected to, the only natural response is to take a deep breath and try and work it all out all over again.

Is this While She Sleeps’ best album? At this point, with  so much density and so much that is alien to the ear, it’s hard to say. Is it one of the most challenging records in this scene from, almost certainly, its most challenging band? Absolutely.

While She Sleeps’ So What? is out on March 1. It is available to pre-order now