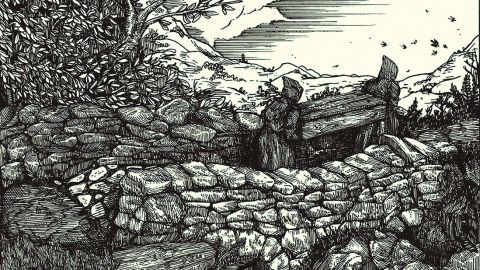 Now this is something exciting. Eighteen months ago Conjurer released their second EP, I, and, thanks to their terrifying mix of tar-thick, charcoal-black, post-metal and d-beat-influenced, teeth-cracking intensity, were instantly marked as a band with enormous potential off the back of it. Since then, some truly stunning live performances have only heightened expectations in underground circles that we might have a special outfit in our midst. But, even with the highest of expectations, Mire is a breathtaking debut album. It almost seems absurd to think that a band this youthful could have such a tight grasp and understanding of metal’s most explosive dynamics straight off the bat. Listening to the isolated snare intro that gives way to the blasting Retch is a giddy thrill, but the depth and restraint that Conjurer display on the Eastern-tinged, Cult Of Luna-esque Of Flesh Weaker Than Ash – an album highlight that crashes like a tsunami wave onto the listener then pulls back slowly, before crushing you once again – is the most telling evidence that this is a group of musicians that are wise well beyond their years. The closing eight-minute-long monolithic stomp of Hadal manages to recall everyone from early mastodon to peak Neurosis, from Converge at their most distraught to Will Haven at their most sadistic. When names like this are being thrown around like a rag doll in your head as Conjurer are aurally punishing you then it’s worth sitting up to take notice.

A few years ago heavy music in the UK didn’t have much to be too proud of. Not any more, though. With everyone from Employed To Serve to Venom Prison capturing the imagination of a new generation of heavy music fans, these days our scene is as diverse and inspiring as we always wished it could be, which gives some hope that Conjurer won’t be lost or ignored like so many before them. If there is any justice, Mire will take them to the very summit of our scene.