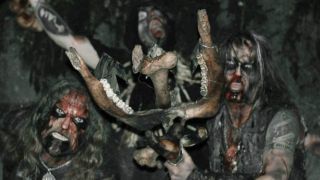 Watain’s rabid extremity serves as a gateway to a dark path many fear to tread, a journey full of the promise of the unknown. Legions of devout fans have followed, drawn to a band who seem more like a gang, and dangerous in a way most music just isn’t anymore. To dismiss the fire and blood of their renowned live show as mere theatrics would be folly – their devil worship is still as deadly serious as ever.

“For me, the Devil has never been evil as such; the devil has always represented a force,” explains articulate frontman Erik Danielsson. “It’s something that empowers you, makes your eyes gleam and the hair on your arms stand up and fucking wants you to go to war,” he says passionately. “It’s an uplifting thing.”

There’s a sense of accomplishment about the man, in London to promote savage forthcoming sixth record Trident Wolf Eclipse. He looks out of place in his humdrum hotel room – slight of frame and wirily muscular, dressed as ever in road-worn leathers, both flesh and attire adorned with the nefarious occult symbolism of his beloved band. Erik and his bandmates – drummer Håkan Jonsson and guitarist Pelle Forsberg – are Watain, born from the hotbed of extremity that is their hometown of Uppsala, a small, religious town where a closely knit metal community has given rise to some of the underground’s most inspiring artists in recent years.

It’s been four and a half years since they released The Wild Hunt, an ambitious opus that saw them broaden their musical horizons, as they reflected upon their 15-year existence. They’ve never left it so long between records.

“We took a long time to write and record The Wild Hunt, longer than usual, so it was natural that it would also take a longer time to let it pass,” states Erik, “which isn’t that strange considering what kind of an album it is; even the title can be said to refer to our journey. It dealt with everything between utter triumph and utter loss, which is why it became very broad in its expression.”

Once the band had got the record out of their system with prolonged touring, it was time to focus their wolf-like glare on the next stage, rejuvenated, and hungry.

“The Wild Hunt was a heavy motherfucker in many ways,” Erik reflects. “The minute we stepped into the rehearsal room we realised Trident Wolf Eclipse was going to be a hard fucking album – very straight to the point, very direct.”

If The Wild Hunt was about reflection, Trident Wolf Eclipse is a return to Watain’s essence, its title a reference to the three symbols that represent the band’s core tenets: an infernally independent pack of outsiders rejecting societal conventions. “It made for a very effective summary of not only the album but how we define our struggle and our work,” affirms Erik.

Trident Wolf Eclipse marks a return to the feral pace of their earlier classics, 2010’s Lawless Darkness and 2007’s Sworn To The Dark, but faster, nastier, hungrier. “This one goes for the throat,” warns Erik, proud of their uncompromising achievement. “It’s rougher, raw; the most savage album we have done.”

Clocking in at 34 minutes, its brevity is a back-to-basics nod to the length of old-school vinyl close to Erik’s heart. “It’s something I’ve wanted to do for a long fucking time: four tracks per side, the pace, the hostility of it.” Its rawness echoes the tape-trading days of old, even down to the roughly hewn cover art – a love letter to early black and death metal, a classic era that, for Erik, “glimmered in the darkness”.

“For me, it’s all about the roughest, homemade, 80s, photocopied demo tapes – as much from metal as old punk, when it feels like an underground terrorist organisation that’s done it, that it’s more than just subculture, that these people are trying to…” he trails off, searching for the right word. Subvert us? “Exactly,” he glowers. “That permeates all our work.”

From opening detonation Nuclear Alchemy to finishing blow the The Fire Of Power, Trident Wolf Eclipse is set to kill, yet imbued with a catchiness that owes as much to classic rock and metal as it does extremity. It’s a balance they’ve always effortlessly struck.

“People relate so much to the 90s Norwegian scene when they talk about black metal – they seem to forget Celtic Frost, Sodom, even Bathory [themselves essential black metal innovators] had a lot of rock’n’roll elements,” asserts Erik. “No one can deny the black metal tradition at Watain’s core, but it’s very important to feel culturally unbound. Watain doesn’t owe anything to anyone.”

Watain’s live shows are transfixing, unforgettable rituals. The stage becomes an altar adorned with burning tridents and inverted crucifixes, the hot air thick with the pungent stench of blood, and at the very centre of the chaos contorts Erik, eyes white, enraptured, the focal point of a horde baying in unison.

“People have a hard time relating to that, or think it’s very special, but to me it’s not very different from the state I’m in when I’m fighting or fucking – we all experience heightened states, moments in time we feel detached from reality – they are moments to embrace and explore… the live scenarios are the moments my life feels important; a pure flow of emotion; pure force.”

The band worked hard this time to capture that feeling on record, a transcendental aura of fury that has eluded them in past attempts.

“There is a savage energy onstage that might not be obvious on the albums,” believes Erik. “It’s there, but it’s never had a central role. We’ve become a band known for our live performances, so it was natural to try to channel the energy we feel onstage into the album.”

In order to do that the band secluded themselves, returning to Uppsala, Erik miming building walls as he describes the recording process.

“We wrote for most of 2016, scrapping a lot of material that wasn’t heavy or fast enough. Even though it’s been the biggest gap between albums, the creative process was short. We were fucking eager to hear new Watain material,” he laughs. “After 20 years it’s getting pretty exciting to see what comes next. It was very much about the three of us in a room. It happened fast and without remorse.”

His evident passion for his band goes a long way to affirm the strength and positivity Erik gets from metal, actively discouraging any associations of negativity. “Let’s avoid that word,” he insists. “Out of this hellfire, brimstone… fucking chaos that emanates out of Watain, a lot of people run; they try to joke, or get upset, but it gives metalheads a sense of power, makes them raise their fucking fist. That’s what we tried to underline on Trident Wolf Eclipse. This isn’t an album meant to produce negativity at all; rather the opposite.”

Watain’s philosophy is about being unafraid to walk your own path, to explore an inner darkness most shy away from. “We are a group that genuinely found beauty and good in what others consider diabolical and sinister,” Erik says reverently. “We have always made a point of having Watain as a separate world, where the world of man isn’t of great concern.”

Trident Wolf Eclipse stands as a triumphant marker on Watain’s personal journey. Their destination remains unknown, Erik open to whatever chaos has in store. “The goal is sacred and beyond words,” he believes. “It’s all about the way there. The more I learn, the closer I get,” is all he can add as an explanation, reluctant to be seen as having answers to life’s big questions. “Watain is not an answer. It is an outcome of living your life exploring these questions. Every album represents where we are in that search. Watain has given us hardships and sorrow, but it has even more so given us strength; the courage to become more than we could have hoped for when we were 16 and thought we’d die before we were 20.” He laughs. “We were constantly heading forward into chaos, and when you do that the concept of tomorrow becomes, at times, non-existent.”

Erik has long since become unafraid of death. “The end comes unexpectedly, radically, and it’s not something you get chance to think about.” It’s a lesson he’s learned the hard way, having recently endured the deaths of both his mentor, Jon Nödtveidt, leader of Swedish black metal pathfinders Dissection, and close friend, Selim Lemouchi of satanic rockers The Devil’s Blood – themselves named after a Watain song.

Erik remains steadfast, though, relishing the long journey still ahead. With Trident Wolf Eclipse Watain have carved the most vicious chapter of their legacy yet. They’ve influenced black metal indelibly, raising the bar with their total commitment to extremity – as the patches that adorn their legion of fans across the world state – ‘to the death’. “My fear of death has become so blunted over the years,” he concludes. “We have already made Watain immortal.”

Trident Wolf Eclipse is out January 5 via Century Media

The Gospel According To Watain's Erik Danielsson