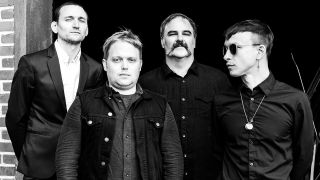 Noise rock has been enjoying something of a renaissance in 2018, with innovative and – most importantly – ear-shattering releases crawling out of each of the genre's far-flung corners. It makes sense, then, that leading the movement's resurgence should be Rhode Island scene veterans Daughters.

Having pedalled their horrible racket since 2002, after a series of hiatuses and line-up shifts, the band have finally returned with much-anticipated fourth album, You Won't Get What You Want. Brutal, claustrophobic, queasy and all the better for it, guitarist Nick Sadler calls it "a decided effort to reference both my admiration for and my influence from, film composition and other minimalist music, along with a few moments of self-reference."

Here, Alexis S.F. Marshall (vocals), Jon Syverson (drums) and Samuel M. Walker (bass) talk us through the album one song at a time. They've even put together a making of video to take you through the album's gestation, which you can check out in the middle of the page. Listen to the album in full at the bottom of the page.

Alexis: "Our journey begins. Eight years later and we re-enter on a slow burn. I wasn’t exactly sure how to fill the verses and decided to take a minimalist approach. The words came together in the final moments, and with secondary tracks and good deal of groans, grunts and the like, we were able to create an intriguing, ominous and foreshadowing opening."

Jon: "The third single from the record, here the listener is exposed to five minutes of sea-sick droning guitar fashioned over a broken ‘disco’ drum pattern. I feel dizzy listening to it. I feel dizzy playing it. Should be a fun listen for everyone?"

Satan In The Wait

Alexis: "One of the longest tracks on the record; Satan... was recorded at an earlier session. It would be shelved, dusted off, then ultimately resurrected. The original vocal track, which was much more formulaic, was abandoned after time allowed for some continued listens and the discovery of a new approach: verses in the form of a fluid narrative. The melody in the chorus lends a false sense of optimism, only to spend the final two minutes under a dark, heavy wave."

Jon: "For all those times my mom has asked me 'Son, is this actually real music?', here’s another one for the pile. Oh, and to answer your question, Mom: Probably not. That said, you can still headbang to it, so that should count for something."

Jon: "This was one of those songs that almost seemed to write itself. Maybe it did? I can say with great certainty that this song truly sounds like Daughters... until it doesn’t.

There is a decent chance the inspiration here came from one of those used car dealership TV commercials where some lunatic is desperately trying to sell you every car off his lot regardless of your current financial status. 'Duke Lickkit Toyota' or 'Bush Clippins Nissan' needs you to come on down! There’s also a decent chance that none of that is actually true."

Alexis: "This was one of the first songs that came together. I approached it with a bit of a blues measure. I tried to say a lot with a little on the lyrical end and I think the narrative is much more captivating as a result. A great deal of layers were added before we closed the book on it, creating a rather lush and uneasy atmosphere. One of my favourites on the record."

Alexis: "I think of this song as the quietest person in the room, with the most interesting backstory. The rolling drums give the entire track a sinister air. The narrative is metaphorical, but once the veil is lifted, the bones reveal one of the most personal songs I’ve composed lyrically."

The Reason They Hate Me

Alexis: "A complaint, an expostulation, a critique on the abuse of critique. We all enjoyed the path this song was carving through the sessions. A lot of fun to compose, as well as play. Reason is a new kind of different for us. It’s brimming with an industrial feel. It’s simply a gratifying listen."

Sam: "Repetition and routine, a life of laissez-faire years. Is there any actual escape from the everyday?  This song elaborates on a pattern of crushing and common boredom. Sink in, you’ll be here a bit."

Sam: "One of the more overtly cinematic pieces of music on this record, Guest House accomplishes a feeling that is entirely new for our band. It was one of the last songs to really come together in the days before recording and I can’t picture the record without it. As much stranger-danger-anxiety as tape will allow, it does not soothe."

You Won't Get What You Want is available now via Ipecac Records.