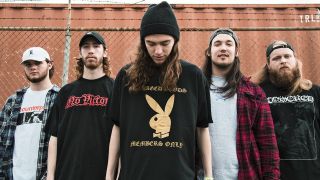 They may be fairly new to the game, but Knocked Loose come with a live reputation and a fierce sound that lacerates through the heart of modern music. The key to their appeal is one singular, primitive goal.

“There’s a consistent theme: heavy,” exclaims frontman Bryan Garris when describing Knocked Loose’s aural torment. “We never set out to do anything new. We just took the good old-fashioned elements of what we grew up with and made it heavier.”

Though only formed in 2013, the band have evolved in a short space of time from the belligerent assault of debut EP Pop Culture to last year’s split EP with Damaged Goods. Full-length debut Laugh Tracks builds on this youthful enthusiasm, refining their fury and hunger and adding a clinical nous to make every ear-splitting scream and gut-punch of the likes of first single Deadringer count.

“We all love really heavy music, so when we first started writing songs we just wanted to make it dumb, heavy and ignorant,” Bryan explains. “The split EP was us trying to be as heavy as possible for the sake of being heavy, and it came out a little insincere. On Laugh Tracks we started exploring what we are capable of.”

From the sinister metallic harmonies of opener Oblivions Peak, their debut is a meld of brutish beatdowns custom-made for the pit, neck-snapping turns of pace and angular attacks out of leftfield, which are topped by Bryan’s intense screams that act as an ideal vehicle for his deeply personal, anguished lyrics. Just don’t ask them to pigeon- hole their sound in a sub-genre – Bryan sees little value in labels and instead heralds his band’s distillation of the wide spread of heavy influences.

“People ask if we consider ourselves as a metalcore or hardcore band: call us whatever you want,” Bryan states nonchalantly. “A lot of people focus on metalcore and hardcore, and see this divide between the two. When I was younger getting into heavy music there was no difference. You could watch Headbanger’s Ball and see bands like Hatebreed and Underoath on the same show. We like it all and just wanted to apply everything without it sounding like a jumbled mess.”

Their only mess tends to be the one created down the front of their already infamous live shows, and as they gear up for their first UK run in November and December supporting Counterparts and Expire, don’t be one of the unsuspecting few stood out in the open when the same controlled chaos is unleashed.

From Crossover To Metalcore: The Genesis Of A Genre