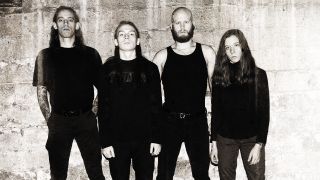 I first saw Code Orange on a boat sailing down the River Thames in 2015. It was there, onboard the HMS Hammer, sailing toward the O2 Arena for the annual Metal Hammer Golden God awards, that I caught a glimpse of the future. I stood still with my mouth agape as four snotty upstarts unleashed chaos. Unfazed by the fact that they were warming up for Napalm Death and that the majority of the crowd didn’t know who they were, these hardcore hoodlums from Pennsylvania were just preparing us for what was to come.

Fast-forward 18 months to January of this year, and I was sitting in my flat, speaking on the phone to Code Orange drummer and de facto mouthpiece Jami Morgan for a feature in Metal Hammer magazine. It was release day for their genre-defying album Forever, a record that breaks boundaries on all sides, delivering relentless aggression and violence amidst an ocean of instrumental adventure and depravity. It’s more than just a hardcore record, it’s the sound of a very pissed off youth, who are just as frustrated with the outside world as the one that they inhabit.

“What we want to hear is not out there in this combination, so we’re creating it,” Jami told me. And there still is nothing like Forever.

Unfortunately when albums get released at the start of the year, there’s a tendency for people to forget about them, but you just can’t switch Forever off. It grabs you by the throat and spits in your face, yet you keep going back for more.

Before long, social media and other music publications were picking up on the buzz forming around Code Orange. Not just their savage music, but their heinously intense live shows. Stories from across The Pond began to circulate about how vicious and absorbing their gigs are, and when they came over to the UK with Gojira in March, it turned out the legends were true. The entirety of the UK’s rock press turned up to see Code Orange decimate The Forum in Kentish Town, sending the thousand-or-so fans down front into a frenzy. Live, the beast is just as snarling and jarring as on record, but it’s even bigger. Growing exponentially as the set rolls on, enveloping all it touches like thick black tar, reaching deep into your senses unwilling to let go. It was great.

Following the gig I caught up with Jami outside the venue with another Hammer writer. For half an hour we talked about the state of metal, why grime is huge right now and what it means to be real. The word ‘real’ has followed Code Orange around wherever they go because that’s what they are – no pretension, no gimmicks, no frills. As their song says “This is real now, motherfucker.”

Then didn’t take long for the Code Orange machine to step it up a gear.

This summer they blew minds at Download festival in the Avalanche tent, when really they should have been on the main stage. Following that, they got involved with WWE, especially NXT Superstar (and devout metalhead) Aleister Black, playing him to the ring at NXT Takeover Brooklyn. It’s been a long time since we’ve seen a heavy band onstage at WWE, especially one as severe as Code Orange. PG-rated this ain’t.

Suddenly, the wider world was waking up to the cult of CO. A band that are fearless, driven and ready to kill. It’s destructive and it’s dangerous, but it’s what the world needs right now. Everything is going to shit and bland, manufactured nonsense just isn’t cutting it. We need dark music for dark times, and it doesn’t get much darker than Forever.

Of course, Code Orange haven’t been the only standout young band in metal this year. Power Trip, Full Of Hell, Employed To Serve, Helpless… all have released some of the hardest hitting slabs of heaviness of the past twelve months. In fact, to celebrate just how good the past year or so has been, we put together the greatest metal tour of 2018. Trivium, Code Orange, Venom Prison and Power Trip. And Matt Heafy and co. should be a little worried about following the Pittsburgh punishers.

Not a bad year for a band still very much in their infancy. But it’s not done yet. Now as we roll into December and the obligatory Albums Of The Year lists come out, eyes are firmly pointed at everyone’s top tens, mindlessly scrolling past numbers 100-11 (because who has the time, honestly?). That said, look who got in at number 50 on Rolling Stone’s list… Code fucking Orange. This is Rolling Stone, remember. Not a metal magazine, not even a music magazine, a culture magazine with serious clout and knowledge behind it. In fact, they are the only heavy band in the list. In a year that saw the likes of Mastodon and Converge release masterclasses, this is no mean feat.

And then, the icing on the cake. New broke today that Code Orange have been nominated for a Grammy. An actual Grammy. Code Orange’s album Forever has been nominated for Best Metal Performance, the same category Megadeth won this year, and previously accepted by Sabbath, Maiden, Priest and Slayer. Can you imagine the faces on the audience if CO win? The look of shock and confusion as Real blasts over the speakers and four kids from the underground hardcore scene stand shoulder-to-shoulder with the giants of contemporary music. Bruno Mars would shit himself.

Even after a year of rocketing further and further toward the moon, it still doesn’t feel like Code Orange are anywhere near done. They’re already several years ahead of other hardcore bands, and you can bet their movement will be straight out of leftfield. This is the genesis of a movement and we’re watching it happen. This is real.