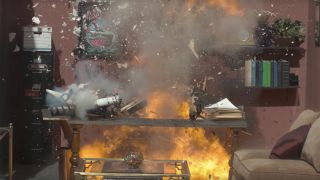 Motley Crue have officially announced they are back together and will tour again.

The band famously signed a cessation of touring contract in January 2014 when revealing their last-ever tour – but rumours of a proposed return to the stage have been building over the last few weeks.

Earlier today, it was reported that the Crue could head out on a US stadium tour next summer with Def Leppard and Poison, and while that has still to be confirmed, Motley Crue have released a video announcing their touring comeback, with the clip showing the destruction of the legal document they signed almost six years ago.

The video is narrated by Machine Gun Kelly, who played Tommy Lee in the hit Netflix documentary The Dirt.

He says: “In 2014, Motley Crue announced their final tour, putting an end to almost 35 years on the road. To make it official, they signed an unprecedented contract.

“In the years since, Motley Crue became more popular than ever and gained an entirely new legion of fans, who, along with diehard Crueheads, demanded the band tear up that stupid contract and come out of retirement.

“They knew that if they were ever to stand onstage together again, that contract would have to be destroyed. Well, destruction has never been an issue for Motley Crue.”

He adds: “Since playing Tommy Lee in The Dirt, so many of my fans have said how they wish they could've seen the real Motley Crue play live. I never thought I would see the day when this would become a reality. But the fans spoke and Motley Crue listened.”

The band are asking fans to sign up for further information on their comeback through their website.

While Motley Crue originally called time on their live career on December 31, 2015, they reconvened in the studio in 2018 with producer Bob Rock to lay down the new songs for the film: The Dirt (Est. 1981), Crash And Burn, Ride With The Devil and a cover of Madonna's Like A Virgin.