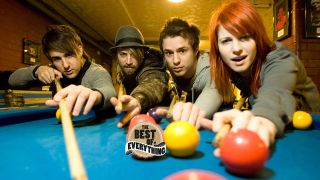 Exploding into the charts in a flailing mess of angsty emo pop and unrealistic hair-dos in the mid-2000s, Paramore have since become an undeniable musical phenomenon. In-between bagging Grammys and providing the soundtracks for high-profile Hollywood movies, they’ve managed to produce five studio albums since their inception in 2005, reinventing themselves and their musical stylings with each one.

It follows, then, that they’ve inspired literally thousands of bands in their wake. Scottish alt.rockers The Violet Kind are one such group. Channelling frontwoman Hayley Williams with their no-holds-barred songwriting, the band create emotionally-driven alt.rock with a serious message at its heart.

The Violet Kind’s frontwoman Katya Mansell joins us to talk us through the best 10 Paramore songs as she sees them. Make sure you check out their new single, Speakeasy, at the bottom of the page.

“This is the first track I ever heard by Paramore. My twin heard the song and knew I’d love it so shared it with me, and from there my love for the band was born. We were so stoked to go and see them at this really small festival in Wales, and I remember Jeremy [Davis, bassist] jumping over some fans in the crowd, replicating the ‘pressure flip’ he would do over Josh [Farro, guitarist] on stage. That was a great summer.”

“The groove in this song is unreal. I just love how strong the bass and drums are in this one, and it’s so important to have that in a song. I’m really proud of our rhythm section in The Violet Kind. They really are the backbone of the band.”

“I love the way the guitar parts in so many Paramore songs intertwine with each other, and I Caught Myself is a really strong example of this for me. This song is just really pretty and uses dynamics in such a good way.”

“I know you’re all judging me for choosing two songs from the Twilight soundtrack, but I’m going with it anyway! Those films came out when I lived in this little village in Thailand and were (genuinely) some of the only films I could find that were in English, so to hear one of my favourite bands on the soundtrack was amazing. Decode ended up being the song I played to audition to get in to music school, so represents a really amazing time in my life.”

“I think the music you listen to as a teenager always sticks close to you. This song really meant a lot to me and it will always be one of my favourites. The vocals are great and I totally love the harmonies. I’ve had many a trip in the car singing this out loud with my friends (and totally failing at the screaming part).”

“There’s something about the chords in Last Hope that just manage to catch the emotion of the song, and I love being able to find harmony that captures what you’re trying to say with music. The lyrics are also important because I think there comes a time in everyone’s life where they’re struggling, but even if you’ve got a little bit of hope, you can keep going. I love the honestly reflected in Paramore’s lyrics.”

“That breakdown section gets me every time. There’s just something about Hayley’s vocals over the half-time drums that I just love. I can’t explain it other than the music just makes me feel happy.”

“I started playing drums as a teenager, and obviously had to learn how to play this song. I remember a friend was listening to me practice and came up to me afterwards to point out that I was playing Paramore. It was the first time I realised that a drum part could be so strong that people could recognise it without even hearing the song playing, and that knowledge made a really big impact on my approach to songwriting: thinking about more than just the melody, but all of the other details, too.”

“Songwriting is so powerful when the listener can relate to what the song is about. As a young (emo) teenager, it really meant a lot to me that it was ok to talk about feeling broken and that I wasn’t alone. I think being able to connect with an audience is incredible, so I try to be as honest as I can when writing lyrics, because I know how comforting it is to feel like the writer is singing about your story.”

“I think a band are always going to risk losing fans when they change their sound, but Paramore really nailed it on their latest album. I love Hard Times. You can really hear from the lyrics (the song title also gives it away a little) that Hayley Williams has had a bit of a rough time recently. The thing I love about this song is its upbeat, bright vibe. One of the things I love most about life is how you can always bring something good out of something bad. This song really represents that for me.”

You can hear The Violet Kind on Spotify, or check out the video for their latest single, Speakeasy, below: