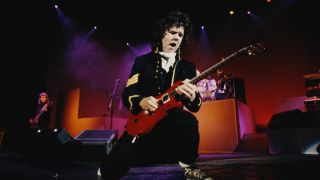 From a career that took in everything from progressive folk loons Dr Strangely Strange to a successful solo career via Thin Lizzy, Skid Row, Colosseum II and any number of axeman-for-hire collaborations, we dig into Gary Moore's back catalogue to unearth ten deep cuts.

Colosseum II - Down To You
From the Colosseum II 1976 album Strange New Flesh. While this band were renowned for extended and extensive instrumental passages, they rapidly take flight from the structured safety of this Joni Mitchell song Some of Moore guitar heroics here are incendiary, but he always knows when to hold back. Really accessible, yet still has depth and the feel of a jam.

Gary Moore - Hurricane From Moore’s 1978 album Back On The Streets. This is a real guitar extravaganza, allowing the man to display not only his fulminating prowess, but also the capacity for leaning into the occasional jazz inflection without any loss of force. It also has hints of a celtic influence. A massive example of the man’s diversity.

Thin Lizzy - Toughest Street In Town From the 1979 Thin Lizzy album Black Rose, this is often overlooked when the charms of the album are discussed. But it is certainly one of the most confident and cohesive tracks here. In some ways a precursor to what the band would do a few years later on Thunder And Lightning. There’s some caustic guitar work from Moore, on a superlative metal cascade.

G Force - White Knuckles/Rockin’ And Rollin‘ From the 1980 eponymous G Force album. This was more of a band effort than something solo. However White Knuckles is a roller-coaster guitar escapade, which is the perfect showcase for Moore. It leads into Rockin’ And Rollin’, a riotous anthem allowing the band to display their close-cropped manic excellence.

Gary Moore - Don’t Take Me For A Loser
From the 1982 album Corridors of Power. And here Moore goes straight through the AOR artery with a song that, while it does has brocades of guitar, also gives him a chance to prove he can sing. Rather well. One of the best British melodic rock tunes of the decade.

Gary Moore - Murder In The Skies
From the 1983 album Victims Of The Future, Moore was very proud of this song, which describes the horror facing passengers on board a Korean airliner shot down by the Russians. He balances the human peril in the lyrics, butted against shards of metallic guitar attack. It’s an effective measure, and makes this one of Moore’s most valuable songs from this era.

From the 1983 Greg Lake album Manoeuvres. One of the few genuinely creative triumphs on the album. Lake and Moore combine well, and the track has a tasty solo from the man. With a little adjustment, it wouldn’t have sounded out of place on Black Rose.

Gary Moore - As The Years Go Passing By
From Moore’s 1990 album Still Got The Blues, the version of a 1950s song made famous in 1968 by Eric Burdon & The Animals is perhaps the best example on this album of Moore’s empathy with the blues. His voice drips with resignation yet hope, and the guitar playing is layered with late night context. Beautiful, yet understated.

BBM - Where In The World
From the 1994 BBM album Around The Next Dream. Here, Moore teamed up with Jack Bruce and Ginger Baker, and the record got a major slating for not being Cream. But, as on this sumptuous power ballad, that was never the idea. Moore and Bruce vocally combine brilliantly, and the guitar flexing is patient and relaxed.

Scars - When The Sun Goes Down From the 2002 album Scars, which was actually released by a band called Scars. This was a trio, who really funked it up, as here. The song hints at Come Taste The Band era Deep Purple, as well as Hendrix and Ike & Tina Turner. Some cranking Moore moments, and it’s really fun.

For more on Gary Moore and how he went from hard rocker to bluesman, then click on the link below.

How The Blues Saved Gary Moore