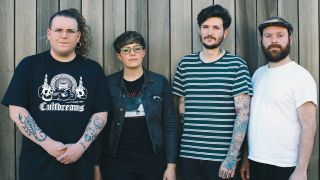 “I wanted to make a record that’s kind of like The Holy Bible by Manic Street Preachers,” Em Foster confesses to Louder. It's a big feat for Foster, AKA the brains behind four-piece alt-punk band Nervus, who's joined us over the telephone to talk us through the band's third album, Tough Crowd. The follow up to 2018's Everything Dies, the album will be released later this month on independent label Big Scary Monsters (Modern Baseball, Tiny Moving Parts, La Dispute are just a few of the big names on their roster). When Em’s not busy fronting the band, she’s the guitarist in punk band Milk Teeth – two bands who will be touring the UK together alongside Cultdreams in November.

A hectic tour schedule isn’t anything new for Em and Nervus. “I feel like I’ve been on tour pretty much (since the first release)," she says. "In between Nervus and other stuff, I feel like we’re all on tour more than home, which can be stressful. But it’s better than looking at the calendar and thinking ‘we’re not doing anything!’”

Em sees both the good and bad that comes with touring. But ultimately, the way she speaks about the highlights of being in Nervus say it all. “Our set at 2000trees was incredible, it was super fun. We had a stage invasion where people were worried the stage was going to collapse. But it was fine, they just needed to chill out!”

The band look in their element when they’re on stage, a long way from where they were before the release of their first record, Permanent Rainbow (2016). Written unaided by Em Foster in her bedroom, the record touches on identity, gender dysphoria and other deeply personal subjects.

The band, who were actually Em’s long-time friends, later joined her, combining what she had written with deceivingly bright melodies and jangly guitars to create something of a perfect contrast. Em describes this time: “When you’re doing stuff yourself, you aren’t necessarily as skilled as someone who does it for a job. When we were recording both albums one and two, we had to do it as cheap as possible. For Tough Crowd, we were like ‘Okay, we’ve got a bit more of a budget, let’s try and do it this way,’” Em tells us. “It was the best, it was really, really fun.”

Nervus worked alongside esteemed punk producer Neil Kennedy, founder of The Ranch in Southampton where the band spent the day. Secluded, reclusive and discreet, The Ranch has hosted a range of different bands, including Boston Manor, Creeper and Milk Teeth. “I already have a working relationship with him from being in Milk Teeth, but I think having Nervus down in the studio that way, it’s the first time we’ve ever done anything like that. It was cool to be able to have someone so capable of realising our ideas.”

Nervus have had a history that’s unlike a majority of bands of their genre. Em Foster, like many other young people throughout the UK, battled with gender dysphoria and alcohol addiction throughout her early twenties. Writing the album Permanent Rainbow liberated her from the emotional tension that came with these struggles.

This is something she talks about candidly in her 2016 interview with The Independent, where she came out to the public as a trans woman. She spoke intensely about her experience and the band established a devoted LGBT+ following who had previously longed for such a relatable frontwoman. Just a few of these fans are shown in the music video for a single taken from Everything Dies, The Way Back. When looking back on this time, Em tells us “the reception has been better than I thought it would ever be.”

Em describes the new record as “lyrically provocative,” and with influences coming from a variety of artists across the spectrum – ranging from American rapper Joey Bada$$, to politically-fuelled 70s punks Crass, to Weezer – the album looks set to defy genre completely.

The influences have “100% changed since the last album. I don’t think it could be much different, aside from being a different band.” Em laughs. “I think that it’s still very much Nervus, but not like we’ve ever been before.” Their second release, Everything Dies, showed the band being unapologetically direct in their lyrics, which take the forefront, touching on a number of different subjects including the environment, mental health and society, accompanied by heavy rock guitars and piercing drums. It screams with anger, and Tough Crowd explores these themes further, tackling isolation and depression in ways previously unheard.

Time alone will tell where Tough Crowd will take this four-piece, but by the sound of it, it’s going to be explosive.