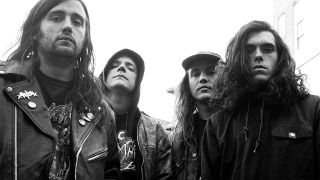 “I live in the deep woods in hillbilly Pennsylvania, where there are a lot of very conservative Christian homes. There are these awesome, really old-school, Old Testament-style wooden signs that you see all over the state. They all have different damning statements on them, and there’s one near my house that I’m obsessed with. It just has a picture of a trumpeter, awaiting the Rapture, and it says ‘Perhaps tomorrow?’”

Metal’s relationship with religion has never been particularly friendly. Today, as the sane world reels from the ongoing exploits of unhinged radical terrorists and a dead-eyed bigot President with a noisily God-fearing fanbase, there has never been more readily available motivation to make music that really sticks it to The Man, raising a proud middle digit to various imaginary overlords in the sky along the way. Perhaps more by instinct than design, Full Of Hell have just released the most brutally pertinent and righteously furious album of 2017, Trumpeting Ecstasy. Increasingly the grind connoisseur’s leftfield troublemakers of choice, vocalist Dylan Walker and his comrades have always been a band with a strong penchant for socio-political fury, but the new album’s 24 ultra-hostile minutes feel like a more focused and telling assault; one driven by the horrors of the here and now.

“While I was writing the lyrics for this record I was surrounded on all sides by all this awful shit going on,” Dylan nods. “I had that wooden sign in my head, and I was imagining how that moment of jubilance might be, if the world suddenly came to an end. That’s where the inspiration for the album title came from. It’s a moment of jubilance in the face of extinction.”

From the grotesque serenity of its artwork, wherein a nun appears to be bursting into flame, to the genuinely extraordinary extremity of Full Of Hell’s new music, Trumpeting Ecstasy could easily be misinterpreted as an all-out anti-religious crusade, and yet one of the things that has long made this band stand out from the sloganeering crowd is that their rage is as much inspired by the complexity of human existence as it is by the banality of received wisdom.

“Because I’m in a band called Full Of Hell people are like, ‘You must hate Christians!’ and I don’t hate Christians,” Dylan states, cheerily. “On a community scale, religion can be a wonderful thing because people are fucking cattle and they need something like that, because death is terrifying and inevitable. The idea of a soul is a beautiful idea and I want to believe it, but I have trouble. I certainly have trouble subscribing to some kind of faith that was invented by human beings to keep people in line. So while it can be a nice thing on a small scale, it’s overwhelmingly a negative thing, but what can you do?”

In reality, Dylan knows exactly what to do, and it’s what Full Of Hell have been doing better than most for some time now. When extreme metal has become such an accepted and often conservative part of the heavy music realm, it is the bands that exhibit the most conviction and the greatest creativity that deserve to have the greatest impact. Aside from the fact that Full Of Hell’s music positively seethes, a quick trot through their impressive catalogue of DIY and non-DIY releases – including, significantly, full-length collaborations with Japanoise legend Merzbow and NYC weirdos The Body – reveals a band with a surplus of ideas and a laudable enthusiasm for making things as vicious, unpleasant and unpredictable as possible. As a socially conscious but unremittingly feral soundtrack to the unsettling tenor of recent months, it could hardly be more perfectly pitched.

“Maybe it’s a fortuitous time to be an aggressive band, because maybe there’s a demographic of people that feel particularly angry and they need that outlet,” Dylan muses. “It’s certainly a time when I feel like so many of our friends are under attack. I guess I have a pretty bleak perspective on our species, but I had this feeling over the last few years that maybe society was progressing. I have a lot of queer friends who were starting to have a voice, for example, and things seemed great. But the end of the US election cycle was stunning, and I had completely underestimated how fucking stupid people are and how awful people are and how fucking disgusting and shitty the world is. That, in itself, has been pretty inspiring.”

Dylan goes on to explain how his band’s support for various socially conscious and, arguably, left-leaning causes has generally prompted a minority of underground metal blowhards to denounce Full Of Hell (“The NSBM- looking dudes generally call us faggots and say, ‘This band needs to fucking die!’” he notes, with a sigh). However, astute extreme metal fans should recognise that this band are one of the few current acts upholding the original spirit of grindcore – the fervent, liberated lust for noise and experimental extremity that drove the early works of Napalm Death and Brutal Truth. Dylan cites those bands as an influence, of course, while also referencing the Hydra Head stable (and Discordance Axis in particular) and “rabid animal death metal” bands like Cannibal Corpse. All of those inspirations can be heard within Trumpeting Ecstasy’s mercifully brief onslaught: an instinctive tribute to what was arguably a more forward-thinking time.

“I think when I joined the band with Spencer [Hazard, guitarist and founder member], our masterplan was along the lines of Repulsion and Napalm Death or maybe Incantation or Immolation,” says Dylan. “But unknowingly, to some degree, because we didn’t know how those guys thought or operated. But having spoken to some of them now, it seems that it was really cool at that time because they all had their own voices and were trying to make something that sounded like theirs and something that was as dark as possible..”

As Dylan concedes, Full Of Hell’s instinctively freewheeling approach means that they don’t fit particularly well into any one scene: “too punk for the death metal guys and too metal for the noise guys”, as he puts it. The upside of their collective approach is that they have been steadily absorbed into the more enlightened and esoteric world of Roadburn (where they performed in 2016) and other tangential subcultural events and enclaves. The album they made with Merzbow in 2014 seems to have a had a particularly stirring effect on Dylan and his bandmates. When the Americans arrived in Tokyo to perform an improvised gig with the much-revered noise warrior in March 2015, his wife was wearing a Full Of Hell shirt.

“It was fucked up!” Dylan laughs. “I kept thinking, ‘Why do we deserve this?’ It was so wild and crazy and sick. Working with Merzbow, and The Body, too, those projects were baptisms of fire, giving us new tour sets to work with and showing us how things can be in the world, as more experienced musicians. We’ve met all kinds of people that I don’t think would ever have thought to pick up a Full Of Hell record before and that’s mindblowing to me.”

If they keep making records as bizarre, intense and, most importantly, as extreme as Trumpeting Ecstasy, Full Of Hell’s reputation and notoriety can only grow and it will become less and less important that they don’t aim to tick the standard grindcore and death metal boxes. Extreme times demand an extreme response, so at least there is one band out there making as much angry, intelligent noise as they possibly can, pushing sonic boundaries as a matter of mortal urgency and grinding like there’s no tomorrow.

“We don’t have a five-year plan,” Dylan concludes. “I think this is the most extreme record we’ve done so far, but Spencer is saying that next one has to be 10 times harder and more extreme. Maybe some day we’re gonna want to write a slow record or something that’s heavy on the drum machines, but I think we can do whatever we want and that feels good. Who knows what we might do? Whatever it is, I think it’ll work for us, and that’s exciting.”

Trumpeting Ecstasy is released on May 5 via Profound Lore. Full Of Hell tour the UK in July

Three more extreme bands that will rip your ears off

Purveyors of rampaging, spittle-spraying grindcore with no hint of compromise or civility, Horsebastard are Glasgow’s most extreme and untamed band. They also have some of the best song titles ever conceived, including Uncles Of The Champion Sandwich and Plod Complex. Watch out for a new split with Italian powerviolence maniacs Ape Unit later this year.

Once you realise that this Washington DC trio’s debut album is cheerily entitled 97,901,726 Confirmed Kills, it seems safe to infer that Pain Tank are going to be a noisy bunch. “Our music is relentless and overbearing because humanity is relentless and overbearing,” they state, as succinct bursts of grotesque sonic horror like Starvation Cockhard and A Need For Violence prove their point.

Shattering the boundaries between scabby-knuckled grind and the hissing malevolence of lo-fi black metal, Belfast’s noisiest duo have a penchant for wild experiments, but every last second of sound they produce throbs with delicious contempt for the human race. Play recent album The Sweat Of Augury as loud as possible and embrace the hate.

Full Of Hell's Guide To Noise