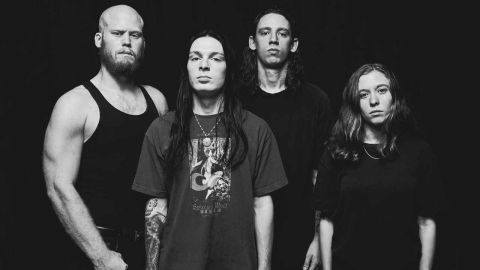 Has hardcore ever really had its big day in the spotlight? You all know the names of Black Flag, Minor Threat, Gorilla Biscuits and Refused, but they meant very little to the wider world when they were actually playing shows. Killswitch Engage may have popularised metallic hardcore, but musically lean far more toward death metal than punk. Gallows took some major label money and gained a few hipster fans for a brief moment, but now reside firmly in the underground.Thirty years down the line and you have to wonder: will a hardcore band ever truly crossover into the world of mainstream rock and metal?

Well, it’s safe to say, if it doesn’t happen to Pittsburgh quartet Code Orange then you might as well pack up and forget all about it. Because Forever isn’t just a great hardcore record – it’s one that’s ripped up the blueprint and pieced it back together in the most outrageously breathtaking way.

This is an album that manages to be both totally inclusive to coax in fans on the periphery of hardcore while being militantly steeped in the feel and aesthetics of the scene as any band you care to mention. This is resolutely hardcore punk, while remaining completely unique. This is a stone cold modern classic.

The opening title track, and the following Kill The Creator and Real, set the stall out early. All three are variations on a theme of stomping, beatdown-heavy riffing, clipped, ultra-aggressive vocals, surprise doomy passages and an industrial-tinged edge. This would be enough to make Forever a very, very good album indeed, but when Bleeding In The Blur brings melodic, alt-rock vocals from guitarist Reba Meyers, an Ace Frehley-style guitar solo and the kind of dark, swirling sounds that wouldn’t sound out of place on a Soundgarden album, you quickly realise all bets are off when it comes to second-guessing this band.

In an age where so many bands are happy merely to pay lip service to the past, how brilliant is it that this is a band who can deliver a track like Spy, which starts like classic Madball, ends with stabs of Nine Inch Nails-style electronic feedback and throws in a riff straight from an Eyehategod record in the middle? Or Ugly, which has as much in common with Killing Joke as it does Converge?

When you reach the two final nightmarish closing tracks, Hurt Goes On with its 80s horror movie synth leading into a wall of pure, white noise and Dream2 doing the best PJ Harvey/Neurosis mash-up ever made, the quality of this album will surely have seduced anyone who is even vaguely interested in heavy, challenging and boundary-pushing music, modern or otherwise.

Forever deserves to be heard by great numbers of people. Make sure you’re one of them.

Back when they were Code Orange Kids, a self-released, three-track EP gave us a peek into the future. It may not have had the muscle that they now possess, but it was performed with total conviction.

With a grittier production than their albums to come, the expanded sludge parts didn’t have quite the same impact as they do now, but there are still moments here that show a very good hardcore band.

With a settled lineup, a debut album was released to massive critical acclaim. Featuring the rough’n’rumble punk that was becoming ever more popular, it marked them out as a band to watch.

The first release without the ‘Kids’, I Am King became a standout in heavy records of the time. Melding the much slower, doomy vibe with some painfully loud industrial moments, it was a career best… until now.

WHAT WERE FOREVER’S MAIN INSPIRATIONS?

“We’re inspired by many forms of dark music: hardcore, metal, industrial, punk, alternative, noise, even hip hop in a production sense. Our true inspiration comes from our drive to write the best record we can, invoking the emotions we feel, while maintaining a urgency and a sense of now.”

DO YOU STILL CONSIDER YOURSELF A HARDCORE BAND?

“We always will be, but for us that means no fear of crossing certain lines. Hardcore is not only where we come from but what continues to inspire us to do what we do. The brevity, pain and moral ground that hardcore represents is always what we want to represent. I think it would be a good thing for more of that to seep into the stale world of modern mainstream metal.”

DID YOU worry ABOUT ADDING SO MUCH MELODY TO YOUR SOUND?

“Not really. Melody is one tool among many others. Everything is about how you incorporate it. It was used more on this record, but it has our absolute hardest parts as well. Trepidation makes bands stale and holds them back. We’re fully aware of how far we want to go.”

WILL YOU PUSH IT EVEN FURTHER IN THE FUTURE?

“Definitely. That’s what we want the motto of the band to be. But that doesn’t mean it’ll go in a specific direction. It will always be dark and painful, but there are no walls otherwise. We want to push it without being boring and ‘post-’ anything. We want to be very now and to define what ‘now’ is.”

Breaking Bands' Record of the Week: Code Orange - I Am King