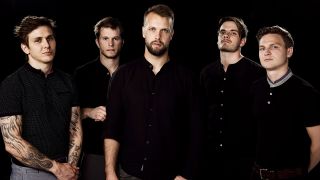 Leprous have released a video for their new single Below.

It’s the first taste of material from the band’s recently announced album Pitfalls. The follow-up to 2017’s Malina will launch on October 25 through InsideOut Music on CD, limited edition mediabook CD with two bonus tracks, 2LP on heavyweight vinyl and on digital and streaming platforms.

Leprous vocalist and keyboardist Einar Solberg says: “Below was the first song written for the Pitfalls album and it was composed in a period of denial of what was to come. It was a very spontaneous song, made first with only piano and vocals."

He adds: “Below is a very emotional and melancholic track, and it means a lot to me personally – both musically and lyrically. Large cinematic string arrangements, electronic elements, very acoustic and organic parts all combined. Very epic but at the same time very fragile!”

Pitfalls was recorded with producer David Castillo and mixed by Adam Noble at Ghostward Studios, while the cover art was painted by Indonesian artist Elicia Edijanto.

Leprous will head out on tour in support of Pitfalls with The Ocean and Port Noir from November.

Leprous: Pitfalls
Leprous will release the follow-up to their 2017 album Malina in October. Pitfalls will feature a total of nine tracks, including the lead single Below.View Deal