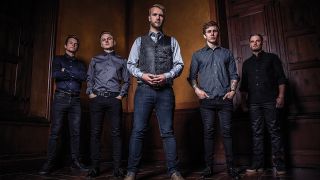 With a population of little over 12,000 people, the Norwegian town of Notodden doesn’t seem the most likely breeding ground for musical legends. The fact that this small, snow-blasted settlement has already given the world black metal icons Emperor is startling enough, but now there is a second phenomenon emerging from those streets: prog metal ingénues Leprous.

Notodden’s second-most celebrated band are perhaps best known as the musicians that backed Emperor frontman Ihsahn when he first hit the road as a solo artist back in 2009, but since that educational trial-by-fire they have steadily built their own unique reputation as fearless contemporary groundbreakers. But to emphasise how tiny Notodden is, it’s worth noting that founder member/frontman Einar Solberg is Ihsahn’s brother-in-law.

“He’s been like a brother to me since I was a little kid,” Einar says today. “When we did the shows with him, that was the moment when we started taking Leprous more seriously. When we got the offer, it was like, ‘OK, this is for real now!’ It wasn’t like playing at the local youth club anymore. For a while we rehearsed more Ihsahn stuff than Leprous stuff, just to get it up to the level that was needed. There was a lot of pressure on us, playing with a legend! I mean, we celebrate Xmas together, but it’s still the guy from Emperor, you know?”

Formed by Einar and his friends at the local youth club in Notodden back at the dawn of the century, Leprous began life as a shambolic punk rock band, “because that was all we could manage to play!” But by the time Ihsahn requested their services, they had evolved into something wildly distinctive and very much in tune with a progressive metal renaissance that was really beginning to gain momentum.

Early albums like debut Tall Poppy Syndrome in 2009, and its bewildering follow-up, 2011’s Bilateral, bore little resemblance to anything from the black metal world, but Einar admits that his mentor’s influence on Leprous has been huge and lasting.

“He has always done his own thing, regardless of expectation,” he notes. “That’s what we’ve done, too. We exist more in the prog scene, of course, and that’s not quite as conservative as some of the black metal fans can be, so it’s a smaller risk for us than for him, ha ha! But he’s a humble person, too. We all admire that and we think it’s really important to never take any of this for granted.”

While Norway is still regarded as the home of black metal, Leprous have spent the last decade quietly going about the business of making genuinely strange, dark and beautiful music that has very little to do with their country’s most notorious subgenre, Emperor included. There is something intrinsically mysterious about the songs Einar writes, both musically and in terms of the hazy and often surreal imagery that inform his lyrics.

That mystery has certainly helped to propel Leprous to the forefront of the modern prog scene, and the new album’s title has already sent many fans scurrying to Google to attempt to decipher exactly what Einar is writing about this time. ‘Malina’ means about 50 different things, ranging from doomed heroines in Inuit mythology to Slovakian rivers, so a proper explanation is required…

“Everyone seems to have a different theory, but it’s actually very simple,” Einar chuckles. “It means ‘raspberries’ in an old Slavic language. The story behind it is probably not what you would expect. I was in Georgia – the country, not the state in America – at my brother’s wedding, and I was walking around, and there was this super-old woman maybe between 80 and 90, who could barely walk, but she was pacing around all day selling raspberries, saying, ‘Malina, malina, malina!’ It made such a huge impression on me and so I wrote the lyrics and the title just stuck. It’s not a great mystery really, ha!”

Given the inspiration for the title, it doesn’t seem unreasonable to suggest that Leprous are making some kind of enraged statement about inequality in society on Malina. Einar is keen to point out that the album is not a concept record in any way and that the songs are all distinct and separate, and yet there is an underlying disquiet to this music that feels all too appropriate for the turbulent present day.

“Well, there is the common thread that it’s all pretty melancholic,” he shrugs. “Even though some of it may seem political, it doesn’t necessarily represent the feelings of the whole band, if that makes sense. We’re not radical left-wing guys as such, we just choose to question everything. Obviously what’s going on in the world has some effect on my overall mood as a composer, but some of the new songs have nothing at all to do with politics. The last song, The Last Milestone, is about something deeply personal. That’s the most depressing song I’ve ever written and it was hard to record it. But I’m not going to talk about it, sorry!”

Tricky to pin down but easy to adore, Leprous may not be making music for the masses, but they are marching onwards and upwards regardless. Malina pulls off the neat trick of being both an album custom-built for these eclectic, pick’n’mix times and a classic example of the album as a piece of deep, challenging art. Ultimately, Notodden was never going to be big enough to contain them. These days, Leprous are far too busy to help Ihsahn out, and you suspect that the Emperor legend wouldn’t have it any other way.

“Next year is going to be extremely busy,” Einar concludes. “We have a very stable band now, with very dedicated people, and we’re not losing money anymore. We’re doing a couple of shows in the UK and a full tour in Europe this autumn with Agent Fresco. Finally, everything is going great. It took a long time. We like to say it took 15 years before we earned our first penny!”

Malina is out now via InsideOut. Leprous play the UK in November