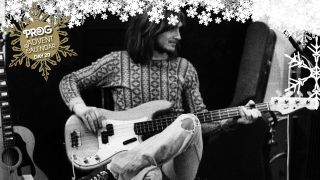 Just five days to go before Christmas Day, and many of us are now thinking of an Xmas break. So Prog Magazine has been celebrating December by drawing on the genre's rich association with festive music, bringing you a proggy treat each day.

Today it's Mike Oldfield's 1975 Christmas hit In Dulci Jubilo, which reached No. 4 in the UK charts. The song, a reworking of the traditional German carol, known in the UK as Good Christian Men Rejoice, originally appeared as the b-side to Oldfield's previous single Don Alfonso, but was re-recorded, adding Les Penning on recorder and William Murray on drums and released as a single in its own right with On Horseback, from Ommadawn, on the b-side in November 1975.

Les Penning recently released a new version, recorded with Magenta's Robert Reed, which is raising money for homeless charity Crisis. You can watch the new promo video the pair have recorded here.

So enjoy. And remember, this isn’t a “best of” list. We're not adhering to any numerical order. These are just 25 great seasonal songs for you to enjoy. It’s as simple as that. Season's greetings.

You can catch up with our previous Advent choices here.