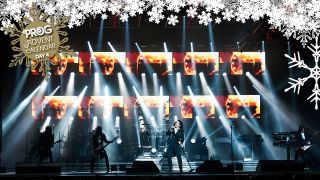 22 days until Christmas then, and between now and then Prog Magazine is bringing you a prog Christmas song every day to help you get in the festive spirit!

Today it's the turn of those doyens of Festive prog'n'roll, Trans-Siberian Orchestra, and their cover of Savatage's Christmas Eve (Sarajevo 12/24). Originally recorded for the prog metallers 1995 album Dead Winter Dead, a concept album based around the Bosnian War. Utilising elements of God Rest Ye Merry Gentlemen and Shchedryck (the Ukranian Christmas Carol that forms the melody of Carol Of The Bells), the song was an unlikely hit for Savatage and again when Trans-Siberian Orchestra (who have featured several ex- members of Savatage in their ever fluctuating line-up) re-recorded it and released it as a single a year later.

In fact, with over 1,300,000 download sales and counting, the TSO version stands as the third highest Christmas/holiday digital single ever released Needless to say, Trans-Siberian Orchestra are currently winding their way across the United States on their annual Christmas tour!