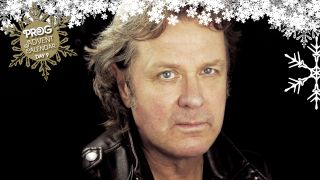 16 days to go now, and, given progressive music's longstanding with the festive season, between now and then Prog Magazine is bringing you a proggy Christmas song every day to help you get in the festive spirit.

Today it's the turn of the late John Wetton and his cover of John Lennon's 1971 Christmas hit Happy Christmas (War Is Over). Wetton recorded the song for the Christmas compilation An All-Star Salute To Christmas, which was released on Purple Pyramid Records back in 2009. As well as Wetton's version of the Lennon song, the album also featured Dweezil Zappa's version of Wonderful Christmastime, Wetton's Asia compadre Geoff Downes covering Linus And Lucy (Charlie Brown Christmas Theme), Glenn Hughes on O Holy Night, Steve Morse on New Year's Day, as well as featuring hair metallers like LA Guns and Pretty Boy Floyd and rock legend Iggy Pop.

Wetton sadly died of cancer in 2017 and remains one of the most popular figures in progressive rock, having featured in Mogul Thrash, Family, Roxy Music, King Crimson,  Wishbone Ash, Uriah Heep and UK, as well as Asia.

You can catch up with previous choices here.