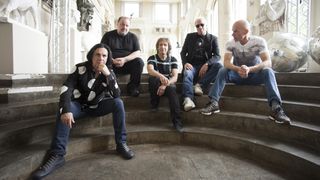 Marillion have released a partial stream of their track The New Kings.

The song features on their upcoming record FEAR (Fuck Everyone And Run) which will launch on September 23.

The album version of the song is split into four sections and clocks in at just under 17 minutes, with the stream featuring just the first segment. The full version is available to those who pre-ordered the album through the band’s PledgeMusic campaign and is also available to purchase via iTunes.

The band previously reported the track looked at “the ravening beast that capitalism seems to have evolved into.”

Speaking about the album title, frontman Steve Hogarth said: “We’ve used ‘FEAR’ as a title with some relish, but only as it shows we haven’t shied away.

“It’s said with sadness. There are two basic impulses behind human behaviour – love and fear. All the good stuff comes from love.”

Marillion will head out on tour next month, starting in Barcelona, Spain.

Marillion Q&A: "We're going on and on and on, until somebody dies"