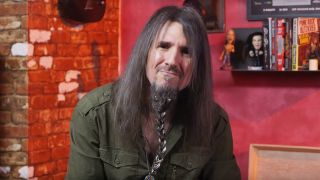 Former Guns N’ Roses guitarist Ron ‘Bumblefoot’ Thal knew that Slash and Duff McKagan were returning to the band when he decided to quit.

But even that didn’t keep him from making the decision to move on – because he believed the time was right.

And he’s revealed that one of his favourite memories from his eight-year stint with Axl Rose is the time he helped a nine-year-old girl sing with them.

Before discussing his departure, Bumblefoot tells Loudwire: “Anything I say will end up turned into something bad, that’s hurt people I don’t want to hurt. That’s what ends up happening, even if I don’t mean it to. So I try not to say too much about it.”

He continues: “You reach a time when you just know it’s time to move on, and you know that what you’ve seen for your life, and what that is, it’s not what you’ve pictured for yourself.

“When I started playing music I was six years old. I thought about what I wanted, what my goals were, and what makes me alive inside making music. I was looking at what I was doing and it didn’t match up. I needed to go.”

Asked if he knew about the reunion, he replies: “Yeah, I did.”

But he hasn’t seen the latest lineup perform. “That would just be weird,” he says. “It’s like going to watch your ex-girlfriend get married. I moved on, they moved on, I hope everybody’s happy, that’s all.”

In 2012 Bumblefoot brought young fan Chloe Paris to a rehearsal, where she sang with the band. He recalls: “The things I remember the most was when something bad happened and it turned into something good.

“There was a sweet girl, and all the kids in school picked on her. I brought her into a rehearsal and she was a big fan of the song Catcher In The Rye. She’s pretty much the only other person who sang with Guns N’ Roses.”

The band’s Not In This Lifetime tour continues. Original drummer Steven Adler rejoined the band for a guest appearance earlier this week.