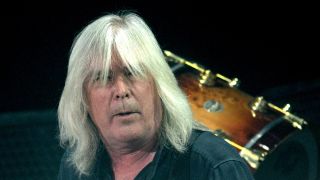 AC/DC bass player Cliff Williams will retire once the band’s Rock Or Bust tour comes to an end.

The band – fronted by Axl Rose since Brian Johnson was ordered to stop touring or risk going deaf – have just 10 dates left on the tour.

The shows are those postponed and rearranged when Johnson’s hearing problems came to light.

Williams says his decision to hang up his bass was influenced by the triple blow of guitarist Malcolm Young being diagnosed with dementia, drummer Phil Rudd’s imprisonment for threatening to kill someone, and Johnson’s forced retirement.

Williams tells Gulfshore Life: “It’s been what I’ve known for the past 40 years, but after this tour I’m backing off of touring and recording.

“Losing Malcolm, the thing with Phil and now with Brian, it’s a changed animal. I feel in my gut it’s the right thing.”

His announcement comes just hours after he appeared in an official AC/DC video, praising his bandmates and guest vocalist Axl Rose.

He said in the video: “It’s just what I’ve always done, I thoroughly enjoy it.”