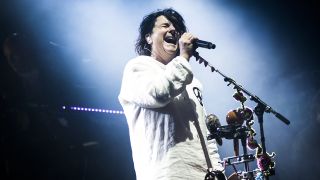 Marillion are just home from playing in South America. Are audiences there as mad as many bands claim?

They’re variable. I found the Brazilians a little more sedate than previously, although the Argentinians and Chileans lived up to expectations.

How close to being finished is the new album, which will be released in September?

We’re nearly there. It has to be ready for mixing in around ten days.

You’ve given it a rather daring title: Fuck Everyone And Run.

I don’t know if it’s daring. This album isn’t a concept piece, but it has two big tracks, called New Kings and Eldorado, which are sister songs. New Kings is about the oligarchs and the banks, and how the poor end up picking up the tab for recessions. Eldorado is about England and what it has become.

Well, I’ve a feeling that the world is about to change irrevocably. We’re on the edge of an advancing storm which is economically based but it’s also ecological and political.

Does this pertain to a certain Mr Trump?

Oh my god. The prospect of him with a hand on one nuclear button and Putin on the other is terrifying. Getting back to your question, Fuck Everyone And Run is a line from the song New Kings. The album title is a reflection of that foreboding I just mentioned. I really hope I’m wrong.

Ahead of some headline shows in November, Marillion are playing at the inaugural Stone Free Festival in London. Are you looking forward to that?

Yeah, enormously so – any chance to play with Rick Wakeman must be seized. Rick’s a lovely bloke. I had the good fortune to get locked in a room with him for twenty minutes at the Classic Rock Awards. I nearly died of laughter.

This is Marillion’s eighteenth studio album – that’s more than four times as many as the original band recorded. Retirement obviously isn’t being considered, then?

[Laughs] No. We’re going to go on and on and on, until somebody dies. Which, given the fact that our compatriots seem to be dropping like flies, could be any day now.