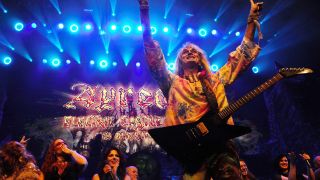 Ayreon will document their 2019 four-night stint at Tilburg’s 013 with a new package titled Electric Castle Live And Other Tales.

After three sold out Ayreon Universe appearances at the venue in 2017, Arjen Lucassen brought together the majority of musicians who appeared on 1998's Into The Electric Castle for the extravaganza, which saw the album performed in its entirety.

The new package will be released on March 27 through Music Theories Recordings/Mascot Label Group on 3LP/2CD and DVD/Blu-ray.

Lucassen says: “Because it was the 20th anniversary of the album, and we’d just remixed and re-released it, we figured it was the perfect moment to perform this live.

“The Ayreon Universe shows were such a fantastic experience for everyone involved, and I’d had loads of requests for more live shows, so we decided to perform the entire Electric Castle album back at the 013, and also play one track from each of my side projects billed as ‘Other Tales’.”

To mark the news, Ayreon have released live footage of Garden Of Emotions which can be watched below, where you can also find the cover art, tracklist and pre-order details.

Ayreon will headline the Saturday evening at this year's XV Night Of The Prog Festival which will take place on July 17 - 19 July 2020 on the festival grounds of the Loreley Amphitheater in St. Goarshausen, Germany.

Ayreon: Electric Castle Live And Other Tales
Ayreon performed over four nights at Tilburg's 013 venue last year to celebrate their Into The Electric Castle album, with the musical spectacle captured for this new release.View Deal