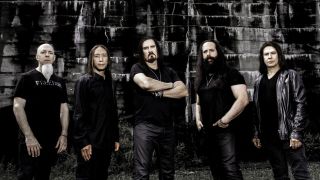 Dream Theater have released an animated video for their Distance Over Time track At Wit’s End.

The song clocks in at over nine minutes long, with the band launching the promo as they prepare to embark on their South American tour. It’ll get underway with a set at the Convention Center Ulysses Guimarães, in Brazil, on December 4.

Following the tour, Dream Theater will take a short break before heading across the Atlantic for a run of European dates in early 2020 where they’ll celebrate the 20th anniversary of their Metropolis Pt.2 Scenes From A Memory album.

Dream Theater guitarist John Petrucci said: “The response to Distance Over Time has been overwhelmingly positive and we are really looking forward to playing some of the songs from that album live for our European audiences in an ‘Evening With’ setting, along with our full headlining show production.

“For those of you who were there when we premiered Scenes From A Memory live in Europe 20 years ago, this will not only be a trip down memory lane but also the chance to see it presented in a completely new light and the way it was always intended to be.

“Our updated presentation has all-new animated video content depicting the characters and storyline through the entire show as they’ve never been ‘scene’ before!”

Petrucci adds: “For those of our fans who were either not born yet, too young, or had not yet been introduced to Dream Theater 20 years ago, this will be a fresh opportunity to experience Scenes live for the first time in its entirety.

Find a list of Dream Theater’s upcoming live shows below.

Dream Theater: Distance Over Time
Dream Theater return with their 14th studio album and the follow-up to 2016's The Astonishing. It includes the tracks Untethered Angel, Fall Into The Light, Paralyzed and Barstool Warrior.View Deal