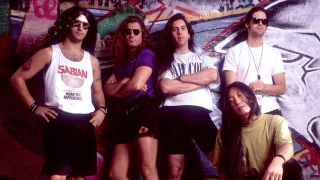 Dream Theater in 1992: far from your average rock band, in any sense of the term (Image credit: Paul Natkin\/Getty Images)

“Yes, we are indulgent, we are over-the-top and we do play drum, bass, keyboard and guitar solos in our live show,” original drummer and driving force Mike Portnoy admitted unapologetically to Classic Rock back in 1999. “But that’s what’s made our fan base so incredibly fanatical. We don’t make records for the press.”

Nearly 30 years after they formed, Dream Theater still have the capacity to surprise. And certainly surprising was the departure of Portnoy in September 2010. Even more unexpected was the fact that, post-Portnoy, Dream Theater have flourished. The wryly-titled A Dramatic Turn Of Events, their first album with replacement Mike Mangini, earned them their first Grammy nomination. More recently, 2016’s The Astonishing was the biggest, boldest thing they’d ever created – no small feat.

With those tumultuous events behind them, the ship is steadier than ever. While the acrimony between Portnoy and his former colleagues has largely abated, the band continue to move forward. These days Dream Theater aren’t just the biggest prog-metal band around, they’re also the living, breathing manifestation of the genre’s boundaries.

Dream Theater haven’t made a consistently poor album, but their debut is by far their weakest. Recorded three years after they formed, it suffers from three main drawbacks: a muddy production (by Rush associate Terry Date), relatively rudimentary songwriting and compositional skills (certainly compared to what came later), and the high-pitched yelps of original singer Charlie Dominci, who left the band soon afterwards. In the plus column were future live favourites A Fortune In Lies and The Killing Hand, and the instrumental The Ytse Jam, all of which pointed towards future greatness.

Four albums in and Dream Theater were being devoured alive by the corporate machine. Their only studio album to feature Derek Sherinian on keyboards, the Kevin Shirley-produced Falling Into Infinity suffered from boardroom interference – they were forced by their label to write ‘radio friendly’ material with Desmond Child – almost to point of throwing in the towel. The likes of New Millennium and Peruvian Skies are reminders that it’s not a bad record, but the arrival of Sherinian’s replacement Jordan Rudess was to prove hugely significant, and its failure only caused the suits to realise that a group such as Dream Theater were probably best left to their own devices after all.

With their first album for Roadrunner, the band once again elected to follow their instincts. After collaborating with an orchestra for their 20th anniversary show (released as the concert set Score), co-producers Petrucci and Portnoy sought to administer a modern twist to the band’s sound.

Bookended by the two-part epic In The Presence Of Enemies and The Ministry Of Lost Souls, its highlights include the Pantera-esque gallop of The Dark Eternal Night. But the most interesting track on the album is Repentance, which includes spoken-word confessions from Jon Anderson, Steven Wilson, Steve Vai and more.

Two albums into the Mike Mangini era and Dream Theater could be forgiven for wiping their collective brow. Less of a walking human hurricane than his predecessor, Mangini was proving a valuable addition to the band, and the quiet life (relatively speaking) seemed to suit them. From its concise three-part instrumental opening track False Awakening Suite to John Petrucci’s Illumination Theory, a 22-minute beast that featured a string ensemble, their twelfth studio set brimmed with confidence. And like its predecessor, it also brought them a Grammy nomination – something that had eluded them during the Portnoy days.

Dream Theater’s seventh album is their heaviest. Written and recorded in just three weeks, it reflected the less-than-happy memories of a summer tour they’d just finished with Queensrÿche. That experience at times coloured the sessions: in the lyrics of opener As I Am, guitarist John Petrucci recalled the apparently comical experience of Queensrÿche’s Mike Stone attempting to give him a guitar lesson. Intentionally or otherwise, the album includes many of Petrucci’s finest solos, but the overall impression conveyed by the record is of unstoppable, if murky, power.

Perhaps responding to the oppressive, knee-buckling weight and density of predecessor Train Of Thought with what became their final major-label studio release, Dream Theater set out to replicate the vibe of another, far happier tour, spent in the company of the heroes of their youth, Yes.

Octavarium retained Dream Theater’s usual complexities but stepped back into more pastoral territory. Written on piano and guitar, and featuring several songs embellished by an orchestra, just two of its tracks went over the 10-minute mark – although the title track was almost 25 minutes long.

The last album recorded before Portnoy’s proposal of a five-year hiatus, which cost him his job, Black Clouds & Silver Linings is Dream Theater at their most song-based recording. The mood veers towards the dark, and four of its six tracks clock in at between 12 and 19 minutes long, though there’s something timeless about each and every one of its tracks, especially The Count Of Tuscany, The Shattered Fortress and the Rush-flavoured The Best Of Times. The perfect entry point for those intrigued by Dream Theater’s appeal but intimidated by the scale of their universe.

Dream Theater’s second consecutive US Top 10 album, and their first to breach the UK Top 20, was the debut for new drummer Mike Mangini after a long and very public audition process.

Although the songs were in place when he arrived, Mangini brought a precision and technique that banished memories of his predecessor. Singer James LaBrie, who had begun to question Dream Theater’s reliance on heavy metal power, later suggested that with ADTOE the band found “a beautiful balance between progressive rock and metal”. And he was right.

Awake was the final album Dream Theater recorded with Kevin Moore, the band’s original keyboard player. And he went out on a high, with an album on which their mix of prog rock and heavy metal influences finally gelled. Equally importantly, the likes of Caught In A Web, The Mirror, Space-Dye Vest and The Silent Man showed the band’s songwriting found its feet in no uncertain terms. It was released during the cold war of the grunge era, and reviews were less than glowing at the time, but hindsight has only served to enhance the importance of Awake in the group’s canon.

Spread over two discs, the second featuring the 42-minute title track, Six Degrees Of Inner Turbulence was a bold and extravagant follow-up to Metropolis Pt 2.

Beginning with The Glass Prison, the first part of a suite of songs written by Portnoy about his recovery from alcoholism, it grapples with such lofty subjects as religion, death and stem cell research, over gargantuan slabs of guitar and keyboard interplay from John Petrucci and Jordan Rudess. The second part is once again concept-based, cataloguing six people plagued by various life-changing illnesses. Challenging in the very best sense of the term.

Think big. Think bigger. Think biggest. And then double it and add a zero or two, and you end up close to The Astonishing. Set in what the band described as “a retro-futurist post-apocalyptic dystopia ruled by medieval style feudalism”, the band’s 13th studio album topped anything they’d ever done before in terms of sheer scale and bombast. With a bamboozling plot that lay somewhere between Star Wars and the Rush classic 2112, The Astonishing was so sprawling that its two hours of music were spread across two discs. Dream Theater performed it live in its entirety, too, of course. Just as they bloody well should.

Dream Theater set up what they called an “inspiration corner” in the studio during the recording of their fifth album. Existing storyboard standards by Genesis, Marillion, Pink Floyd and others were used to channel ideas for their own debut concept album, which told the complex tale of a man who undergoes regressive hypnosis and discovers that in a previous life he was a woman murdered in the 1920s. The record’s myriad twists and turns are at times macabre (Strange Déjà Vu, Fatal Tragedy) and uplifting (The Spirit Carries On, Finally Free) – and never less than compelling.

Dream Theater had to overcome a number of hurdles in order to create their second album, and their masterpiece. Recovering from the embarrassing failure of their debut album, When Dream And Day Unite, for the follow-up they brought in new singer James LaBrie and butted heads with their producer, David Prater, who drummer Mike Portnoy later called “one of my least favourite human beings on the planet”. Despite all that, it’s difficult to fault Images And Words, which did far more than just enable Dream Theater to let in a vital chink of daylight. In fact its start-to-finish excellence served to open up a skylight to the cosmos.

Listen to the Dream Theater playlist we’ve created below.