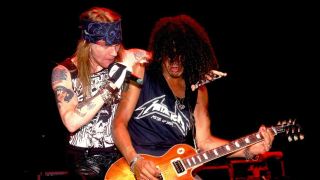 They’ll now also play at Foro Sol in the Mexican capital on April 20 after the April 19 date sold out.

Slash, Axl Rose and Duff McKagan have scheduled appearances at Coachella on April 16 and 23 and are also lined up to play the T-Mobile Arena in Las Vegas on April 8 and 9.

The band – who confirmed the reunion of Slash and Rose last month – are thought to be planning a wider tour.

It’s understood that guitarist Richard Fortus and keyboard player Dizzy Reed will be part of the shows, as the pair left their roles in the Dead Daisies last month to take part in “a momentous project.”