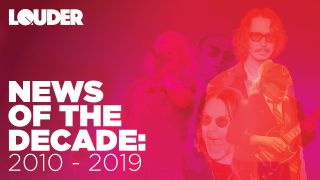 As the decade draws to a close, we decided to take a look back at the key moments that shaped rock, metal and prog over the past 10 years.

From January 1, 2010, through to the present day, it’s been a whirlwind of events – from the joyous to the sad and everything in between. Here are the key moments from each year.

• The start of the decade gets off to a promising start, when Chris Cornell announces on new year’s day that Soundgarden are reforming after calling it quits in 1997. It was the spark that resulted in Cornell, Kim Thayil, Ben Shepherd and Matt Cameron creating 2012’s King Animal.

• On January 24, German veterans Scorpions announce that their 17th studio album Sting In The Tail will be their last, while the tour in support of the follow-up to 2007’s Humanity: Hour I would also see them take their final bow. However, in 2014, things took and unexpected twist.

• On February 17, drummer Mike Portnoy joins Avenged Sevenfold following the death of James ‘The Rev’ Sullivan the previous year. Portnoy contributes to the band’s fifth album Nightmare and also joins them on the road, but departs later in the year to be replaced by Arin Ilejay.

• In February, David Ellefson rejoins Megadeth after his departure in 2002 – the year Dave Mustaine disbanded the group. Mustaine reformed Megadeth in 2004 for The System Has Failed, but the bassist was left out of the lineup.

• And talking of musicians rejoining their old bands, 2010 sees vocalist Joey Belladonna rejoin Anthrax and appear at Sonisphere with the other members of The Big Four: Metallica, Slayer and Megadeth. Belladonna replaced frontman John Bush who originally joined Anthrax in 1992 after Belladonna was fired.

• On March 28, Rush are inducted into the Canadian Songwriters Hall Of Fame at a ceremony in Toronto. Five of the trio’s tracks were also enshrined: Closer To The Heart, Limelight, The Spirit Of Radio, Subdivisions and Tom Sawyer.

• On May 16, the worlds or rock and metal are plunged into mourning when Dio, Rainbow, Black Sabbath and Heaven & Hell icon Ronnie James Dio dies after being diagnosed with stomach cancer the year before.

• Also in May, Slipknot bassist Paul Gray dies of an accidental overdose. Gray was one of the founding members of the Iowa heavyweights, with his band paying tribute to the 38 year old on their 2014 album .5: The Gray Chapter.

• On August 24, Behemoth leader Adam ‘Nergal’ Darski is diagnosed with leukaemia and subsequently undergoes a bone marrow transplant. He makes his return to the stage in May the following year, when he appears with Fields Of The Nephilim at London’s O2 Academy to join the band for the track Penetration.

• While Mike Portnoy left Avenged Sevenfold after a short spell in February, no one expected him to walk away from Dream Theater – the band he co-founded in 1985. However, on September 8, he announces that’s exactly what he's doing – a move which leads to a public war of words with the band, and even an attempt to then rejoin. He is replaced by Mike Mangini, with Portnoy going on to play with numerous artists including The Winery Dogs, Transatlantic, Flying Colors, The Neal Morse Band and Sons Of Apollo.

• In November, Queensryche visit US troops based in Kuwait and Iraq to play a series of shows, but during a trip to northern Iraq, the band are injured and are forced to take shelter after a bomb attack on the camp they were visiting.

• On December 17, Don Van Violet, aka Captain Beefheart, dies at the age of 69 from complications from multiple sclerosis.

• On February 6, Belfast-born rock and blues guitarist Gary Moore dies at the age of 58 while on holiday in Spain after suffering a heart attack. Moore played with bands including Thin Lizzy, Colosseum II and went on to forge a successful solo career.

• On February 13, Iron Maiden win their first Grammy Award for Best Metal Performance for the track El Dorado and also go on to scoop the Best UK Band at the Metal Hammer Golden Gods.

• On April 20, Judas Priest co-founder and guitarist K.K. Downing leaves the band after 40 years. He’s replaced by Richie Faulkner who has been with Priest ever since. Despite a strained relationship with the band, Downing would be inducted with Judas Priest into The Rock And Roll Hall Of Fame in 2020 should their nomination be successful.

• Motorhead guitarist Michael ‘Wurzel’ Burston dies on July 9 at the age of 61. The musician, who played with Lemmy and co between 1985 and 1995 died from ventricular fibrillation caused by heart muscle disease. Wurzel played on the Motorhead albums Orgasmatron, Rock ’n’ Roll, 1916, March Or Die, Bastards and Sacrifice.

• In August, Warrant frontman Jani Lane dies at the age of 47 at a hotel in California, with authorities revealing that he died of acute alcohol poisoning.

• In November, Decapitated survive a plane crash landing while flying from the US to Warsaw in Poland. The Boeing 767 LOT flight they are on lands on its undercarriage after the wheels fail to deploy, sending the aircraft sliding down the runway. All 230 people onboard were uninjured, with Fryderyk Chopin Airport remaining closed for 30 hours after the incident.

• January begins with a bang when Killswitch Engage reveal they've parted company with frontman Howard Jones, later revealing that former singer Jesse Leach is returning to the fold. He left Killswitch in 2002 to be replaced by Jones. The story has a happy ending, though, with Jones joining Leach and his former bandmates on the track The Signal Fire, which appeared win their latest album Atonement.

• Also in January, Black Sabbath legend Tony Iommi is diagnosed with lymphoma, with the guitarist receiving treatment and subsequently able to hit the road with Sabbath in 2013 in support of what is to be the band’s final album 13.

• On March 3, Montrose guitarist Ronnie Montrose dies at the age of 64. It’s initially thought that he died due to prostate cancer, but the San Mateo County Coroner later revealed he had taken his own life.

• April 12 brings news that Queensryche have sacked frontman Geoff Tate after his relationship with bandmates Eddie Jackson, Scott Rockenfield and Michael Wilton breaks down. The move ends up in a legal battle over ownership to the band name, with both parties reaching a settlement in 2014.

• On April 14, it’s confirmed that Opeth frontman Mikael Akerfeldt has decided to walk away from Bloodbath. At the time he said he had never seen the band as a serious project and that playing with the death metal group was not progressive enough for his tastes.

• On June 27, Lamb Of God frontman Randy Blythe is arrested at Prague’s Ruzyne Airport and charged with manslaughter following the death of 19-year-old Daniel Nosek at a Lamb Of God show in 2010. Blythe is accused of pushing the fan from the stage, which caused injuries that led to Nosek’s death. Blythe is held at Prague’s Pankrác Prison for 37 days before he is bailed. He subsequently flew home to the US and returned to the Czech Republic for the trial in February 2013.

• Deep Purple co-founder and keyboardist Jon Lord dies on July 16 at the age of 71 after a battle with pancreatic cancer.

• Early August brings news that Anthrax have made history when they become the very first metal band to be played on Mars. Their cover of Joe Jackson’s Got The Time is one of the tracks selected by NASA to wake up the Curiosity Rover on the Red Planet’s surface, with guitarist Scott Ian exclaiming: “There will be moshing on Mars!”

• Baroness are involved in a serious road accident on August 15, when the coach they are travelling in careens 30ft off the road near Bath, leaving nine people injured, including vocalist and guitarist John Baizley. His arm is so badly crushed that doctors consider amputation. Baroness name their 2015 album Purple after the crash, with Baizley saying: “The band suffered a gigantic bruise. It was an injury that prevented us from operating in a normal way for quite some time. Hopefully, this record is the springboard that helps us get away from all that.”

• On October 1, it’s announced that Anette Olzon has parted ways with Nightwish, with the vocalist later claiming she had been sacked. Olzon was quickly replaced by current singer Floor Jansen.

• Hawkwind guitarist Huw Lloyd-Langton dies on December 6 at the age of 61 after a two-year battle with cancer.

• January 4 brings news that Rob Caggiano has left Anthrax, with the guitarist confirming in February that he’s joined Volbeat as a full-time member.

• On February 4, Randy Blythe’s manslaughter trial gets underway in Prague, with the case centred around the death of 19-year-old Daniel Nosek at a Lamb Of God show in 2010. Blythe is acquitted on March 5, with judges ruling that concert promoters were largely to blame for the death and that the vocalist’s actions did not constitute a crime.

• Clive Burr, the former Iron Maiden drummer, dies from complications from multiple sclerosis at the age of 56 on March 12.

• On April 13, Deftones bassist Chi Cheng dies at the age of 42. He had been involved in a serious car crash in California in 2008 which left him in coma and although showing signs of improvement in early 2012, he dies after suffering a heart attack.

• On April 18 at the Nokia Theater in Los Angeles, Rush and Heart are inducted into The Rock And Roll Hall Of Fame. It’s the fist time in the Rock Hall’s history that fans are allowed to have their say through a special fan’s ballot, with Rush coming out on top.

• Slayer guitarist Jeff Hanneman dies of liver failure on May 2. He contracted the flesh-eating disease necrotising fasciitis in 2011 and had been on hiatus from the band since then.

• Early May sees Brian ‘Head’ Welch rejoin Korn after walking away from the band in 2005. He performs several live shows in the summer with Korn before going on to play on their 11th album The Paradigm Shift – his first with the band since 2003’s Take A Look In The Mirror.

• On May 7, As I Lay Dying frontman Tim Lambesis is arrested for plotting to have his estranged wife Meggan murdered. He’s charged after attempting to pay an undercover police officer $1000 to kill her, but pleads not guilty. He later changes his plea during the 2014 trial.

• In late May, Slayer confirm that Dave Lombardo has officially left the band, with the thrash giants bringing in Paul Bostaph as his permanent replacement. The news comes after Lombardo missed Slayer’s Australian shows earlier in the year.

• Vixen co-founder and guitarist Jan Kuehnemund dies on October 13 at the age of 51 from cancer.

• Slipknot fans are left reeling when it’s revealed on December 12 that drummer Joey Jordison has parted ways with the band. His departure is put down to “personal reasons” with Jordison later reporting that his battle with transverse myelitis was the reason.