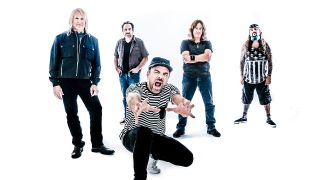 Here singer Casey McPherson, guitarist Steve Morse and bassist David LaRue talked us through each track from the new release...

Casey McPherson: "When you approach something as simple as rock and roll, it can be difficult to put your own spin on it. Everyone likes to say it sounds like this, or that. But we like to just not even think about any of that… and this is our rocker. Desperate for freedom from addiction, consumerism, and lust."

Steve Morse: "This starts with a musical idea I had been saving for Flying Colors. Sort of a regal, slow march, with the melody played by guitar using artificial harmonics. I always tend toward a kind of triumphant feel when I do instrumental sections... possibly because I listened to a lot of classical music over the years. But this theme starts almost without tempo, and is only hinted during the intro, as it is more completely played later.

"Anyway, I love Casey's vocal melody over the verses, it just floats along. So, to fit that, he wanted us to have a ringing, not strict definition of the chords. I used the 12 string there, as well as lots of jangly clean guitars with open strings. The vocal chorus has some of Casey's best high, full voice singing I've heard, then it goes to the instrumental payoff.

"The middle section is Neal going out singing and jamming on the acoustic while we keep the energy just bubbling underneath.  Ending with the instrumental theme, to recap and put it to bed."

Dave LaRue: "This tune is a bit of a departure for Flying Colors. It reminds me a little of Steely Dan - starts with a strong groove that continues through the verses. Obviously, I love playing this tune because it is so bass driven. The next section has great hits, or accents that are almost horn like to me.

"The harmony through that section provides a nice release from the verse sections. Finally, the hook rocks hard, in typical Flying Colors fashion and has a great vocal transition to lead us back to the groove."

Casey McPherson: "We all love the Beach Boys, and for some reason every album they pop out on our record. But it’s also our Beatles, Jellyfish, ELO, Silverchair guilty pleasure!"

Steve Morse: "This one starts almost the way it did when we were writing. In fact, I think the first few bars is the actual drum sound from my studio when we were writing it. Mike plays the beat in 7, then it changes to the regular studio sounding drums, now here we go. I always like answering vocals with a melodic rhythm line, and so you can hear that after each line in the verses. I used a swirling, wet clean sound, with a little bit of amp edge for those.

"Then it's into a chorus that doesn't sound like any that come to mind, which I like very much. Just after the last chorus line, Dave and I play an instrumental theme that works well way up high on the bass, and in unison with the lower midrange of the guitar. The guitar solo in the middle is a weird, slow section that changes between bar meters and made it a challenge to make it flow naturally at first.... but, the more you play it, the more natural it sounds, (which is a common thing in FC tunes).

"Next comes what sounds like an open jam, but Dave takes the lead and plays an absolutely brilliant bass solo. And yes, he can do just like that live!  After a crescendo between Neal and I with a rising, note filled sequence, it's back to the chorus, then modulate to a higher chorus, then out with Mike's drumbeat bringing it full circle."

Casey McPherson: "This is one of those songs that is such a classic “product” of us. A strong mix of each of our creative energies in each section to create what we are. And it came out so effortlessly."

Casey McPherson: "Our only drop D song on the record, and a great feature for my more 'soul' vocal, and Steve and Neal’s version of some good rock and roll."

Dave LaRue: "Another FC epic. The way we are able to knit together seemingly disparate sections into a complete tune that actually makes sense has always amazed me. The tune begins with a beautiful arpeggiated piano part, after which Casey enters and does that soulful thing he does so well.

"The song continues to build, and we put essentially the same themes through a variety of different sections and feels. This is another one that I love playing, it has great vocals throughout, but there are a lot of intense instrumental moments, as well. Steve adds some great guitar work in the middle of the tune. The story within the lyrics is conveyed beautifully by both Casey and Neal."

You Are Not Alone

Casey McPherson: "This is our 'peaceful harbour'... and the lyrics came later, except the chorus. It really honed in on my experience rescuing people in Houston during Hurricane Harvey. We also call it 'you will not stay in the same key'."