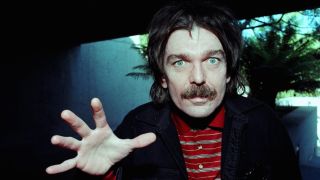 The estimable Don Van Vliet, aka Captain Beefheart, once declared that “if you want to be a different fish, jump out of school”. He stayed true to this piscine maxim throughout his career, creating a scintillating new form of music that rearranged the DNA of blues, jazz, psychedelia and avant-rock. Here are just a few genius moments from the dozen studio albums that he and various iterations of his Magic Band recorded between 1967-’82…

Prior to retiring from music to devote himself to painting, Van Vliet ensured that he went out with a creative bang on his studio send-off, Ice Cream For Crow. The title track is vintage Beefheart: mesmeric vocal, hyperactive boogie-blues, crashing rhythms and oblique references to full moons, pumpkins and the unstable desert sun.

Ostensibly a simple ode to the joy of sweets, which the Magic Band used to throw into the audience at gigs, Beefheart’s alternative version of Kandy Korn from 1971’s Mirror Man stripped away the fussy production that had blighted its original appearance on 1968’s Strictly Personal. The result is this complex and convulsive minor masterpiece, stretched out over eight riveting minutes.

Built around a riff salvaged from the back end of abandoned tune Odd Jobs, Tropical Hot Dog Night is a striking piece of quasi-calypso with Art Tripp on marimba and Bruce Fowler parping merrily on trombone. It also finds Beefheart at his lustiest, urging the fairer sex to come out ‘to meet the monster tonight’.

Given his dense and often impenetrable wordplay, it’s unusual to discover Beefheart in emotionally vulnerable mood, as on this outré blues ballad for his wife, Jan. It’s all the more engaging for its relative simplicity too, coloured by mandolin and an ascending/descending guitar motif. Originally appearing on 1973’s Clear Spot album, the song cropped up 25 years later on The Big Lebowski soundtrack.

A terse standout from Beefheart’s penultimate album, Doc At The Radar Station, Ashtray Heart is experimental avant-rock with big jagged edges and a gurgling riff. John French’s drum rhythm is suitably agitated, while Van Vliet offers up one of his finest performances, his voice full of vigour and phlegm as he provides an allusive reference to the punk generation that he inspired.

The title track from the album that Van Vliet once proclaimed his own personal favourite, this atonal beauty is fired by a trebly guitar line and impossibly itchy percussion. Neither blues nor jazz, the song’s relationship to the world of conventional rock is entirely peripheral. Libidinous lyrics abound: ‘She stuck out her tongue and the fun begun.’

Its title a sly rejoinder to the popular ‘40s standard Moonlight In Vermont, this song from Beefheart’s most iconic album the Frank Zappa-produced Trout Mask Replica, is a corrosive bastardisation of swamp-blues. Bill Harkleroad excels on guitar as Beefheart builds to a climax, bellowing out ‘Gimme dat ole time religion’ like a drunken fairground carny.

The Magic Band are at their magnificent best on this not-quite-metal racket, with Art Tripp’s staccato drums forming a backdrop to gnashing twin guitarists Mark Boston and Bill Harkleroad. When it all suddenly pauses, Beefheart rasps at Harkleroad: ‘Mister Zoot Horn Rollo, hit that long lunar note and let it float.’ Which he does. Memorably.

Legend has it that A&M boss Jerry Moss ditched plans to sign Beefheart and his Magic Band after hearing Electricity and declaring it too negative for impressionable young teens. Van Vliet sings like the meanest white bluesman alive, as Alex St Clair Snouffer and Ry Cooder drive it along with invigorating psych-guitar and Sam Hoffman adds weird shivers of theremin.