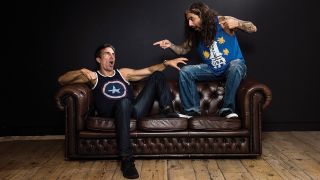 Sons Of Apollo have been a supergroup in waiting for a long time. Five years, to be precise, ever since former Dream Theater members Derek Sherinian and Mike Portnoy teamed up with bassist Billy Sheehan and guitarist Tony MacAlpine to form the short-lived instrumental live project PSMS. The musical understanding and chemistry between band members was palpable, and over the intervening years, Sherinian has been frequently hounding Portnoy to try to persuade him to convert the band into a fully fledged studio unit.

“PSMS was nothing more than a fun live thing and we didn’t have any expectations beyond that,” says Portnoy. “It was something for me and Derek to be playing together again and have some fun. We did a European tour and an Asian tour. The musical chemistry in that band was so strong and each individual musician was so strong that after that tour, Derek was egging me on to do something more full-time with it, but the timing was just not very good. It was also intentional for me to kind of avoid the progressive metal genre to do different things. Finally, earlier this year, after years of nudging me on, we finally got to a point where the time seemed right to pick up where we had left off and turn it into a full-time, vocal band.”

“It has mainly been me bringing it up to Mike and saying, ‘Let’s do this for real and get a singer and form the ultimate prog metal band,’” adds Sherinian. “I understand that after being in Dream Theater for all those years, he wanted to diversify and work with different players. But I think that most of his fans really want to hear him playing prog metal, the genre that he helped invent. So that’s what we’re doing with Sons Of Apollo and it’s the most natural style for me to play as well.

“When we announced we were going to do this, there was a bidding war from three major record labels for this band because they just knew that the secret sauce was Mike and I together playing this style. At the end of the day, people want to hear me and Mike going apeshit on our instruments.”

There have been a couple of additions to enhance the appeal of the band. MacAlpine has been replaced by former Guns N’ Roses guitarist Ron ‘Bumblefoot’ Thal, and singer Jeff Scott Soto (Yngwie Malmsteen, Journey) was selected to front the band. In typical Portnoy fashion, the album was written at speed, with the writing commencing in March and the album being delivered to the record label in July. That pace is something which is nothing new to those who have followed his career, but for any band to record an album as compelling as this debut in such a short period remains startling.

“I think that over the last 20 albums I’ve made, most have been made this way,” says Portnoy. “I don’t think the quality of anything I’ve done this way has suffered as a result of working quickly – it’s just a matter of being very focused and creative. The only time in recent history when I spent a ridiculous amount of time making records was with Dream Theater and, to be honest, there was a lot of money wasted on those records.”

“We’re hungry and you can fucking hear it on this record,” says Sherinian. “The creative process in this band is really healthy. We immediately felt that Ron was a long-lost brother and we just dug right in like three little kids with paint and an open canvas.

“The beautiful thing about Sons Of Apollo is that Mike and I are the producers, so we basically get to do whatever the fuck we want. There’s nobody telling us what to do and we don’t have to send in daily demos to some A&R suit who doesn’t know shit. We basically just let ourselves go for 10 days and tried to write the sickest and best music that we possibly could.

“The difference between what we’ve done in the past and what we’re doing now is that we’ve placed great emphasis on songs. We’ve got memorable choruses but also have adventurous musical journeys within them that are unrestrained. We play the way we always have played, but there’s a lot more emphasis on quality control, with the lyrics, the melody lines and song structure. It’s like the first Van Halen album but with chops.

“We also really took time to go through each vocal phrase to make sure there was no cheese anywhere, no gargoyles or Dungeons & Dragons shit, and no rectum-puckering high notes. Everything is very smooth and ballsy.”

Sherinian makes a vital point. There are countless prog metal acts who are merely imitators, prepared to regurgitate the genre’s clichéd, hundred-notes-a-second technical excess at the expense of adept songwriting, soul and choruses. It’s a blessing then that Sons Of Apollo have taken a far more embracing approach, brimming with virtuosity but adding that key accessibility.

Songwriting aside, it’s Jeff Scott Soto’s vocals and the introduction of Ron ‘Bumblefoot’ Thal into the group that have certainly aided the band in creating something more original than just another prog metal act.

“I think Bumblefoot is going to be the big surprise for a lot of people,” exclaims Portnoy. “He’s the real star of the show here and people who only know him from Guns N’ Roses, where he wasn’t really able to do his thing, are going to be shocked at what he can do. He was incredible to write with and took what myself and Derek were doing in a very different direction. Bumblefoot is a guitar hero and I always wanted to work with him in a band and give him the platform to truly shine. I think this album will absolutely do that.

“Jeff is also an amazing frontman. He knows how to work the crowd and front the band, which I knew would be a great asset. The greatest asset of his voice is that it has a real accessibility. He’s got a great background in the AOR kind of stuff, and from when he was fronting Journey for a little while.

“Derek and I have this crazy prog background. Billy and Bumblefoot are doing crazy guitar unisons, so Jeff is really the anchor and the glue to make the whole thing very listenable.”

Those hooks Portnoy refers to are prevalent throughout the album, but in Coming Home and Alive, Sons Of Apollo have created a pair of tracks that could, given the right opportunity, provide them with crossover single success. In these days of dwindling radio importance, it’s difficult to fathom quite how that leap could be made, but the potential is clear.

“Alive to me is a home run on every level,” agrees Portnoy. “In a perfect world, that would be as big as a Foo Fighters or Red Hot Chili Peppers song. It’s something you could picture being played in a stadium. That was the first song that Jeff demoed up and sent to myself and Derek, and I was just floored. That was the moment that proved he was the right man for this band. We’ve shot a video for Alive as we hope for that to be the single when we hit the road next year. This band has the commercial potential to really stand up in today’s market. I think there’s enough there for the existing fan base but there’s also a lot there to make a lot of new fans.”

There’s an inevitably, though, that with two former Dream Theater members forming a progressive metal band, comparisons between the two acts will naturally follow.

Perhaps surprisingly, Portnoy remains relaxed about the Dream Theater-related questions that will unquestionably pepper every interview over the next 18 months. Indeed, he reveals that he’s been able to “build up a very nice personal relationship with both John Petrucci and Jordan Rudess over the last couple of years”, adding that he’s “comfortable in my own skin and feel I have definitely moved on”.

Yet Portnoy suggests that one of Sherinian’s motivations in reforming the band was to invite comparisons between the two acts.

“If I’m being honest, a lot of Derek’s incentive to form this band was to, in his words, ‘Reclaim my rightful throne to the genre that I helped create,’” he laughs. “But once we got together and started making the music itself, it really went to so many different places that go way beyond the Dream Theater world. It has the progressive metal moments on Gods Of The Sun, Labyrinth and Opus Maximus, and those three epics are definitely progressive metal material in the Dream Theater vein. But then you hear songs like Signs Of The Time or Coming Home and they have a hard rock, Van Halen, Deep Purple kind of influence. The album ended up becoming very diverse and something that transcends the progressive metal tag.”

Sherinian is more forthright in his assessment of Sons Of Apollo’s prospects and perhaps, given the manner of his replacement in Dream Theater in 1999, there’s a suspicion that he’s been waiting for a moment to perform in a band that can invoke musical revenge on his old bandmates.

“It really is an original sound and it’s not fair to compare us with Dream Theater,” he says. “Dream Theater really isn’t the Dream Theater it was. With Sons Of Apollo, people are going to hear the influence that Mike Portnoy brings into a band and you’re going to see the spirit that’s maybe not in Dream Theater now.

“I read a lot of the message boards and it seems that a lot of Dream Theater fans weren’t happy with that last release. I haven’t heard it, but the consensus seems to be that it was very Walt Disney and didn’t have any balls to it. So we want to invite those fans to come over to Sons Of Apollo because I’ll tell you, man for man, pound for pound, there’s not a band with the virtuosity, the balls and the presentation that we have.

“I’m not saying that in an arrogant way. I’m saying that because it’s a fact. I think Sons Of Apollo is the best thing that will ever happen to Dream Theater and if it gives them a new spark of inspiration to start making great records again, then it’s only beneficial for the fans.”

Such statements could merely be seen as PR bluster to provoke interest in the project, but he makes a forceful argument. This band is ludicrously talented and with the commercial attributes possessed by some of their songs, they have the potential to achieve a mainstream success not seen in the genre for a long time. It’s a fact not lost on Sherinian, as he closes with an upbeat soliloquy that you suspect is only partially tongue-in-cheek.

“I’m going to make a bold statement,” he proclaims. “Dream Theater have sat on top of the throne for the last 20 years and have been completely unchallenged until now. But now is the era of the Sons. There’s only so much room at the top of prog metal, so they need to start clearing their shit out now because we intend to have our thrones put in there by October 20th…”

Psychotic Symphony is out on October 20 via InsideOut. See www.sonsofapollo.com for details.

Mike Portnoy - The 10 Albums That Changed My Life

Back to the future: Dream Theater's Images And Words 25 years on