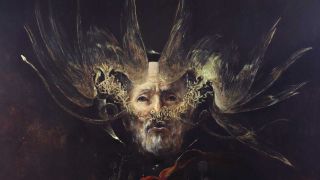 Released in 2009, Evangelion had already blown Behemoth out of the underground, transforming the Polish blackened death metallers from cult heroes to one of the leading extreme metal bands on the planet. But in its aftermath came news of frontman Nergal’s battle with leukemia, as well as brushes with religious authorities back home in Poland following an incident where he tore up a Bible onstage, and five years would pass before a follow-up surfaced. The wait was worth it: The Satanist was not only voraciously received by fans and critics, but would prove iconic, demonstrating a more organic, honest and personal side to Behemoth – perhaps no surprise, given its origins.

“It was very much rooted in the healing process,” Nergal explains today. “I don’t want to say that the album was a reaction to my leukemia, but it was definitely a reaction to my whole life, and I definitely had a need to redefine myself as a human being. That’s why The Satanist resonates on so many levels and so many dimensions. It was very much rooted in where I came from. It was like a rebirth of an artist, of a human being – there was this fire deep within that should be unleashed, and it was manifested in the form of this record.

Recorded after touring with Watain, In Solitude and The Devil’s Blood, The Satanist took some of the former’s transformative energy as well as overtly occult themes that weren’t drawn from history so much as a personal call to enlightenment. Not just a response to the events of his own life, it was also a reaction to the more militaristically precise and calculating approach of its predecessor, and it stands in marked contrast to that record thanks to its broader, more cathartic emotional palette.

“I really had an inner need to make something new, especially after Evangelion,” says Nergal. “I really needed to liberate myself and to liberate the fans, so to speak – do a record that was going to be more emotionally driven, more real in every sense, more organic, more natural, not pushed, not stressed, just going with the flow with everything that is leaving your system. I really wanted to cut down the ‘intellectual’ factor; obviously, you need your brain to put things together, but I really wanted my heart and emotions to play the number one role when making the record, and you can hear that. It was really time to break new ground, and I felt this was maybe my only chance to do it.”

Though Nergal makes clear that he feels the album works as a complete whole, he will admit that there are still certain numbers that have a particularly profound effect on him today.

“When we play Ora Pro Nobis, Lucifer or O Father O Satan O Sun!, I feel the shivers running down my spine,” he concludes with a grin. “I always analyse things, but what I value the most is my own body’s reaction to something, and when I perform certain songs, I’m like, ‘Shit, this is real.’”