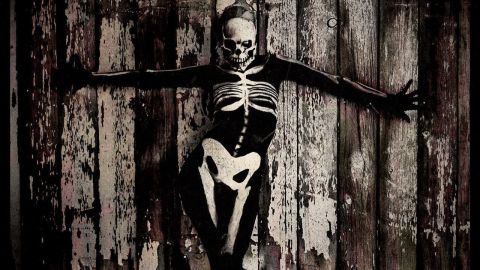 So this is where the speculation ends and the reality of Slipknot without the much-missed Paul Gray or the noisily jettisoned Joey Jordison is laid bare. The principal concerns expressed by the faithful seem to be fairly simple: will this be a ‘proper’ Slipknot album? Can it possibly match up to previous albums? And, in light of much evidence that the bulk of songwriting has been provided by Jim Root and Corey Taylor, will the whole thing sound too much like Stone Sour?

The truth is that from its title and artwork down to the filth and fury that drives its most vicious riffs, .5: The Gray Chapter is every inch a Slipknot album, albeit one coloured by recent events. These songs have more in common with Slipknot’s third and fourth albums than they do with the myopic spew of Iowa, but from the ominous harmonium drones and skin-prickling ambience of the opening XIX onwards – ‘I don’t want to get back up,’ Corey sings through gritted teeth, ‘But I have to… so it might as well be today’ – this is an exhilarating exercise in battling with hostile shadows.

If you want brutal, turbocharged Slipknot, then there’s plenty of that here. Sarcastrophe is a flurry of dissonant knife jabs, with pitiless blastbeats and lashings of Sid Wilson’s wild turntable skills. AOV kicks off at high-velocity Slayer pace: a blur of churning thrash topped with Corey’s bug-eyed, staccato delivery boasting a huge chorus with shades of Dead Memories’ air of slender hope. Skeptic is both the most blatant tribute to Paul Gray here and the closest thing to the Iowa era, with its rampaging, atonal gait and stop-start riffing. ‘The world will never see another crazy motherfucker like you!’ roars Corey, leaving no doubt as to the song’s focus.

Best of all, the three-song section that lurches from Custer’s gruesome opening riff, full-pelt clatter and anguished bellow of ‘I’ve lost my fucking mind!’ through the eerie drones and unsettling atmospherics of Be Prepared For Hell and into the familiar but fizzing devilry of The Negative One is as thrilling as anything Slipknot have released to date. Throw in the disorientating noisescapes and percussive freak-outs of Kill Pop and Lech, the grotesque balladry of Goodbye (‘Come on over… come unglued…’) and the broken- hearted, funereal squall of If Rain Is What You Want and this could hardly be misconstrued as a some cynical creative hijack by Taylor and Root. In fact, .5: The Gray Chapter is dominated by Craig Jones’s nightmarish FX, Sid’s feverish scratching and Clown’s twisted widescreen vision, and there are arguably fewer moments of melodic conservatism here than on All Hope Is Gone or Vol.3.

In answer to those questions, then: yes, this is a ‘proper’ Slipknot album; yes, it’s as good as All Hope Is Gone, but not quite up there with the band’s greatest albums; and no, a couple of big melodies aside (and what band with a singer of Corey Taylor’s calibre would restrict him to screaming his head off?), this bears little resemblance to Stone Sour’s big rock bluster. A bad trip with moments of spinetingling intensity, this is what Slipknot sound like in 2014. And it’s pretty fucking great.

Pre-order .5 The Gray Chapter from iTunes.