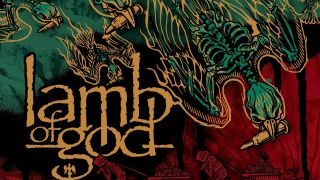 ‘If there was a single day I could live. A single breath I could take. I’d trade all the others away.’

When Lamb Of God signed to Epic for their third studio album (and no, we’re not counting Burn The Priest’s one-off as a Lamb of God album in this context), many wondered if the Virginians’ savage riffs, ground-shaking grooves and status as the People’s Metal Band would be diluted by the allure of major label cash and that ever-risky Holy Grail of a mainstream-denting hit single. No such bad luck: Ashes Of The Wake landed with all the grace and subtlety of Godzilla on a three-day stag do. Producer Machine gave an extra layer of weight and grit to Messrs Morton and Adler’s battering riffs and Randy Blythe’s snarling, razor-throated vocals, while standout ‘singles’ like Now You’ve Got Something To Die For hung around hooks so visceral they were less likely to be featured on Top Of The Pops than used to drive viking gods out of the very skies themselves. It would launch the band onto an international stage and accelerate their ascent into metal’s upper ranks – though Randy believes it was all part of the grand plan.

“In our career, everything feels like a very slow, very organic climb,” he argues today. “We don’t really see any one moment where things ‘changed’, but Ashes Of The Wake was our first album on a major label and our first with Machine producing, and it was a snapshot of where we were at.”

As Randy explains, having a Big Name metal producer stepping into the ring with a vocalist who was a tad, to say the least, volatile at times, produced a dynamic that he wasn’t entirely ready for – and it pushed him to give one of the performances of his career.

“It was the first time I had had anyone produce my vocals, and it startled me at first,” he admits. “Before, normally it was just someone pressing record, because we’d be on a tight budget or time constraint, but on Ashes…, Machine was very, like, [waves his arms around], ‘Arghhhh!’”

“The first time I recorded vocals with him, I remember he jumped up after I got two lines in and kicked the chair over,” he continues with a laugh. “I was like, ‘What the fuck are you doing, man?!’ He was like fucking [Public Enemy’s] Flavor Flav or something. He’d get really pumped up and throw things and scream at me, and we’d keep getting vocal takes, but then it started really working.”

‘Working’ is an understatement. Ashes Of The Wake went on to become Lamb Of God’s most commercially successful album, putting them on stages around the world and solidifying them as modern metal’s most vital band. And to this day, it still fucking slams.