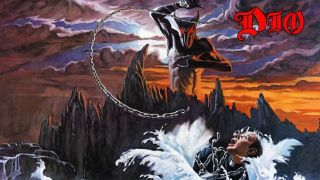 Few people get a chance to make one truly iconic album. Ronnie James Dio was involved in three. The first two were Rainbow’s 1976 symphonic rock landmark Rising and Black Sabbath’s career-reviving Heaven And Hell four years later. And the third? Holy Diver – the debut from the band that bore his name.

The little man with the big voice had unceremoniously exited both Rainbow and Sabbath, and he was determined it wouldn’t happen again. With wife/manager Wendy steering his career, Ronnie decided to build a group around himself. Recruiting ex-Sabbath drummer Vinny Appice, former Rainbow colleague Jimmy Bain and Northern Irish guitar prodigy Vivian Campbell, he began working on what would become the third in this holy triumvirate of legendary albums. We’ve compiled a series of classic interviews to bring you the full story.

Ronnie James Dio: “I was very angry, coming out of Sabbath. The way I saw the world, anyone who wasn’t family or a close friend was poised to cut me open with a knife.”

Vinny Appice: “When Ronnie asked me if I was interested, I said: ‘Fuck, yeah!’ Ronnie was a great leader. I looked at him as a brother.”

Ronnie: “We tried a couple of guitarists in Los Angeles, but after playing with [Rainbow’s] Ritchie Blackmore and [Black Sabbath’s] Tony Iommi, everything else paled into comparison. I really wanted a British musician – the attitude was far superior to American musicians.”

Vivian Campbell: “Jimmy Bain recommended me to Ronnie. I was still living in Belfast. I flew over to London, I met Ronnie and Vinny for the first time. We started playing and Ronnie started smiling. He liked what he heard. A few weeks later I flew to LA and we started writing the Holy Diver record.”

The newly assembled band began work on Holy Diver in early 1983 in Los Angeles’ Sound City Studios. Vinny Appice and Jimmy Bain had worked with Ronnie before, but for the 20-year-old Vivian Campbell, it was a more intimidating experience.

Vivian: “It was a little bit difficult because of the respect I had for Ronnie. He was so much older than me and he was one of my heroes. The cassette that I had in my car that was on constant play was Black Sabbath’s Heaven And Hell album.”

Ronnie: “The opening song, Stand Up And Shout, was a negative statement of my own disenchantment, and I was projecting it out to anyone who’d listen.”

Vivian: “Ronnie always had books with lyrics – he’d sit down and listen to what we had, and we’d play it for him a couple of times. He’d step up to the mic, and he’d start singing.”

Ronnie: “The song Holy Diver is really about a Christ figure, who on another place, not Earth, has done exactly the same as we’ve apparently experienced or were supposed to have experienced on Earth: dying for the sins of man so that man can start again and be cleansed and do it properly.”

Vivian: “It really is a simple record, there was not much going on in terms of production. It’s a very honest record in that way, and it features very raw and very real performances.”

Vinny: “When the album was finished, we smoked some pot and started listening to it at ear-deafening volume in the studio. We were like, ‘Fuck, man, this sounds fucking good!’”

Holy Diver was released in May 1983. Its striking album cover was designed by Ronnie and Wendy and illustrated by Randy Berrett. The image of a demon drowning a priest stirred up some minor controversy – something the band didn’t shy away from.

Ronnie: “I seem to remember a little bit of, ‘Are you sure you wanna do this?’ from the record company. But the idea was to reverse the question of, ‘How come you’ve got a monster drowning a priest?’ We wanted to be able to say, ‘How do you know it’s not a priest drowning a monster?’ And I think that’s kind of been proven out in the last few years with all the problems we’ve had in the Catholic Church. In hindsight, I like to think we were right about who we put in the water.”

Vinny: “We played a warm-up gig in Antioch, California a few weeks after the album came out. We figured whoever shows up shows up. So we go up there and come showtime there are 3,000 people stuffed into this place.”

Ronnie: “We thought, ‘We’re going to go out on the road now, let’s build a big stage set.’ So that’s what we did. Mortgaged the house for that one.”

Vinny: “The album came out and we watched it climb the charts and started hearing it on the radio in LA. Next thing you know, four months later, we’re playing arenas.”

Despite the success of Holy Diver, the seeds of discontent were already being sown. Vivian Campbell and Jimmy Bain both bristled at the perception that this was the singer’s solo project – and at the unwanted control they saw Ronnie’s wife, Wendy, having over the project.

Vivian: “Ronnie told us this was gonna be a band project. He was gonna present it as a band even though it was gonna be named Dio for obvious name recognition reasons.”

Ronnie: “It wasn’t an ego thing on my part. I had a certain reputation, and it just made sense.”

Vivian: “I didn’t join the band as a hired hand – I was under the impression we were a proper band.”

Wendy Dio: “Ronnie was always in control, yes. But we’d funded everything. They were on retainers, whether they worked or not. Plus they got all their publishing. Let’s put it this way: the band was called Dio. All those other people were unknown.”

Vivian: “I was fired from the band [in 1986]. I refused to accept a contract that they offered me which was contrary to the original agreement Ronnie had made with Jimmy, Vinny and myself.”

Of the musicians who made Holy Diver, two of them are no longer with us. Jimmy Bain died of lung cancer in 2016. Ronnie James Dio himself passed away from stomach cancer in 2010. In 2012, Vivian and Vinny formed Last In Line, initially to play songs from the first three Dio albums, including Holy Diver.

Vinny: “It’s amazing to think we wrote these songs 30-something years ago and people are reacting the same way. It’s a great feeling.”

Ronnie James Dio: “Holy Diver is one of the proudest things I’ve ever done. There were great songs and great playing, too.”