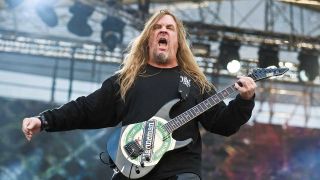 The first time I first met Jeff was in 1981, just after Kerry [King] and I had put the band together, when we were rehearsing at my parents’ house. I guess Kerry had met him somewhere, and they got talking, and the next thing you know he’d brought Jeff to the house. He just looked like some quiet surfer kid to me: long blond hair, living in Long Beach, could be on a surfboard. I was, like, “This kid is cool.”

Jeff was such a big influence on the sound of Slayer. We were into the typical metal of the time – Judas Priest, Iron Maiden, Rainbow, Deep Purple, you know? Then one day Jeff shows up to rehearsal with a shaved head. We were all, like, “Whoa, Jeff, what’d you do?!” He went: “I’m punk. It’s over.” And he brought all of this music with him: some vinyl, some cassettes – Black Flag, TSOL, Minor Threat, Dead Kennedys, Circle Jerks. I was, like, “Wow, what rock have I been under? This is fantastic!” It was a huge pivot point – our songs became faster, more aggressive after that. He was the one that brought that element to Slayer.

When you first meet somebody, especially at that age, everybody’s kind of quiet and to themselves. But as you began to get to know Jeff, he’d open up. He definitely had that punk, “Fuck the world” attitude, especially after a couple of beers.

But he was a real caring guy, too. There was one time I remember we had driven to play this club in Canada on our very first tour. We got there a night early, and there was this band playing, so we hung out, had some drinks. I got so wasted that I went to the toilet, closed the stall door, sat down and just passed out. I guess Jeff had come looking for me. He comes in the bathroom and he’s there trying to open the stall door – he’s pulling it, almost breaking the door off  its hinges to open it. And then he realises, that all he has to do is push it. So he opens the door and picks me up. I asked him afterwards, “Jeff, were my pants down?” And he laughed and said, “No, dude, you were just sitting on the toilet with your pants up.” But that was the kind heart of Jeff. I know that if I needed any kind of help, he would step up. He was that kind of guy. He was a good friend. That matters.

What a lot of people don’t know is that Jeff was the least musically educated and least musically trained in the band. He was a novice when he joined. I’d been in two or three bands before that, but Slayer was his first. He didn’t know much, but he slowly developed and played and taught himself. It was, like, “Wow, dude, you forged that path, you did it yourself.”

He was the one who would create his own demos for the songs he was writing. He’d program the drum machine, he would have the parts already figured out in his mind, which was different to how Kerry would present his songs. I remember him commenting on my drum parts. He’d say, “Ooh, I like that, that’s tasty – make it tastier.” Or if I came up with a typical rock drum beat, he would classify that as being “cheesy”. It had to be cutting edge to make it on the record. It had to be “tasty”.

I never saw any negative competition between Jeff and Kerry. They both wanted the best for the band. I’m sure Jeff was inspired by Kerry and I’m sure Kerry was inspired by Jeff, especially his ability to improvise, which is something that Jeff had the upper hand on Kerry and Tom [Araya, frontman] with. But Jeff and Kerry were very much inspired by KK Downing and Glenn Tipton from Judas Priest. If you notice, Hanneman was on stage right just like KK Downing, and King stage left just like Glenn Tipton.

Jeff and I put together a side band called Pap Smear in the 90s. That was us being punk rock kids. He wanted to play bass, so we got in Rocky George from Suicidal [Tendencies], who Jeff loved – he really admired the soul Rocky had when he played. And this kid who I used to go surfing with was the singer. His name was Joey Fuchs, but he called himself Joey Hanneman and pretended to be Jeff’s brother, ’cos they both had blond hair and kind of looked like each other. We wrote maybe five or six pieces of music, but we never played a live show ’cos I feel Pap Smear was kind of taking our focus away from Slayer.

Like everyone, you grow up and take your own path. When I rejoined Slayer in the early 00s, we were all a little more mature, but Jeff was still that happy, joking person he always was. I was able to reconnect with him more. We’d spend a lot of time on the tour bus, talking, having lengthy conversations – not deep, just random stuff.

Towards the end of his time in Slayer, he had gotten to a point where his performance wasn’t up to par with the rest of the band. The alcohol was taking its toll, and so were the operations he had had. It was sad, but we had to make the decision and break the news to him. I know that it crushed him.

Before all that went on, we didn’t know how long Tom wanted to continue, ’cos he was contemplating retiring even back then. So Kerry and I were talking about putting a band together, and we said, “We need to recruit Gary Holt” ’cos we knew him from Exodus. As it turned out, Gary became the guitar player that took Jeff’s place, and that was approved by Jeff. He was a big fan of Gary’s playing – Gary had that feel and soul that Jeff loved in guitar players.

If Jeff was still here and still in Slayer, he wouldn’t want to retire. He’d fight to keep the band going. He’d have taken the band by the horns and driven it on. His love and his passion was music and being onstage. That passion was dampened by toxins, but it was still there.

If there’s a single Slayer song that really defines Jeff, it’s Necrophobic from Reign In Blood. That was one of the fastest songs we’d done: it had this aggressive, brutal, almost monotonous sound. He’d walk around, just mimicking that sound. I remember him going, ‘This one’s fast, it’s brutal, we’re going to take it to the limit, to the point where we can’t play it any faster.’ And that’s what we did.

I think about Jeff a lot. Not just when people ask me about him in interviews, but in my time alone, too. When you’re growing up, you have that ‘live fast, die young’ attitude but you secretly think you’re immortal. Then you stop and go, “Oh, he is gone” and it leaves an empty space in your heart.

Towards the last years, probably the last six months he was touring with the band, Jeff would sit on the tourbus and reflect on the shows. He’d go, “Damn, man, Angel Of Death turned out great tonight.” And after a couple of drinks, he’d be like: “I wrote that shit, Dave. I wrote that shit.” He was so proud of those classic songs he’d written. He was so proud of what he’d done.

As told to Dave Everley.