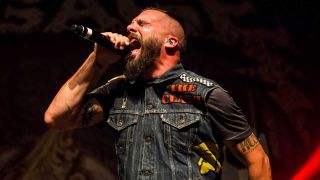 In our semi-regular feature Thinking Out Loud, we find out what’s going on in the minds of the great and good. This week, we poke around the brain of Killswitch Engage frontman Jesse Leach.

“Love is something that you have to work at, it’s not something that just happens. I think we all have love inherent inside all of us, but it’s definitely something that you have to put effort into. My father used to say, ‘Love is an action.’ I love that. It’s something that keeps moving and developing and growing, hence why it’s one of the hardest and also most rewarding things you can experience. Love has inspired me to write music, it saved my life when I was a suicidal young kid, it’s made me travel and do things that I wouldn’t normally do to step outside of my selfishness as a human being, and it’s made me a better person. It’s also broken my heart, for sure.”

“Music is absolute life. If there was no such thing as music then I don’t think there would be a reason for me to be on this planet. It’s in my blood and it’s in my soul. The crazy thing about music is I don’t think people realise how important it is in everyday life. I think we take for granted how much music is around us at all times, even if it’s just the hum of an industrial motor or the clanging of a bell. Music drives everybody and it’s at the soul of every human being, regardless of whether they say they like music or are passionate about it. And it knows no language barrier; I’ve been to places like China and Africa and Thailand and had all these kids singing lyrics back at me. That’s a magical feeling.”

“The majority of politicians are complete liars and the system that we’re under is all smoke and mirrors and deception. It’s a total scam. I completely disagree with all of it and I’ve become much more of an anarchist these days. I think we’re being lied to constantly. I know it sounds really dismal and dark, but I don’t believe that voting matters at all. That’s just where I’m at right now. I think it’s all bullshit. For me personally, as a lyricist and a songwriter and someone who’s paying attention, I like to walk a fine line when addressing these issues in music. I don’t have enough information to truly know everything that’s going on, so it’s difficult for me to take a hard stance on something when there are so many different angles. I just want people to think; I don’t want to sway them in one direction or the other. But I do think it’s important to be aware of what’s going on around you.”

“Spirituality is something that reminds us that there’s a greater force out there. I think it’s essential. It makes us question things and it makes us wonder, and it’s definitely made me a more humble person. Thinking that we have all the answers is a flaw that we have as humans. I’ve always been interested in people who deny spirituality and strictly look at science, because my whole thing is that science is based on human intellectual thought, and that can only go so far because we only use so much of our brains. So my question to people who deny spirituality has always been, “Where is the wonder in the world? What about those moments that you can’t describe with words?” I think we’re at a point now where people are looking to science much more for objective thought, but I think we could discover more if we married science with a sense of spirituality and were open to both topics.”

“I think psychedelia is important for aiding people with depression, anxiety and dementia. Studies have been showing it lately – and I can attest to it personally – that psychedelic drugs in small micro-doses can really help people with mental disorders. Mushrooms and LSD have been scientifically shown to calm anxiety, help with depression and re-channel the synapses in the brain to alter personalities and help fix glitches in ways that we never thought were possible. And the natural side effects of those drugs in low amounts is far less damaging to your brain than prescription drugs. The big pharmaceutical companies are making billions of dollars by essentially poisoning our livers and brains.”

“I actually think most drugs, on the whole, are good for humanity. Marijuana, for instance, can help people go through chemotherapy, which is a horrible thing. But just like anything, abusing drugs can be detrimental to your physical and mental health. I definitely can’t stand cocaine though. I think the way that it’s processed and the whole methodology behind it, from the people who make it to the way it gets shipped in, make it a disgusting drug. I hate cocaine. I dappled with heroin when I was younger and that’s also a terrible, life-sucking drug, but I don’t think using it should be a criminal activity. I know it sounds ridiculous, but I think that we should legalise everything and treat addicts and drug abusers as people with mental illnesses, not criminals.”

“Defining what success is can be really tough sometimes. For me, there are moments when I don’t feel successful, but that’s just my way of thinking. If I were to break it all down, I’d say that if you set personal goals and you achieve them then that’s success, regardless of whether or not it means so in financial terms or in the eyes of the fans and the critics. Having small goals and achieving them is true success. The key is to find satisfaction in those things. I might not be a rich man, but I can look in the mirror every day and know that I’m doing something that matters. I think that’s success, too.”

“I don’t want a gravestone and I don’t want to be commemorated, I just want to be burnt and put back into the earth. I don’t mean that in a morbid way at all, I just think that the ego of humans is ridiculous: as beautiful as gravestones and that stuff is, it doesn’t make sense to me. I just want to be remembered as a good person who tried to do good things. I’d be happy with that. But how am I going to know? I’ll be dead! I am concerned with my legacy whilst I’m alive though. I want people to receive love and positivity from me, and have my reputation precede me. But in the long run, when you pass away, you have no way of knowing what people are going to say about you. So I guess it essentially doesn’t matter.”