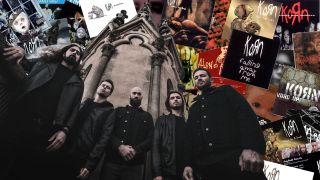 The mountainous, picturesque landscape of Switzerland might be best known for a more wholesome 'sound of music' but its alpine terrain has spawned plenty of morbid and offensive metal tunes too.

The likes of Hellhammer, Celtic Frost, Samael, Eluveitie, Cellar Darling and Zeal & Ardor have all emerged from this European nation, and ready to join their ranks are emerging blackened melodeathers Voice Of Ruin.

The Swiss metallers formed a whopping 21 years ago and have toured constantly in the past two decades, including alongside metal heavyweights such as Sepultura, Cannibal Corpse, Children of Bodom, Hatebreed, Obituary, Samael and The Black Dahlia Murder.

Their latest album Acheron was recorded in the home of melodeath – Gothenburg, Sweden, of course – and was produced by Henrik Udd and Fredrik Nordström (In Flames, Arch Enemy, Architects, Dimmu Borgir).

The result is a fresh and original take on melodic death metal, with brutal AF breakdowns, chugging guitars, thrashing solos, blackened tritones, epic Dimmu-shaped symphonies and well, everything but the kitchen sink, somehow effortlessly moulded into one technically accomplished album.

This unique blend of melodic death metal, thrash and black metal might indicate their influences lie within extreme genres, but before Voice Of Ruin discovered anything that pushes the boundaries on what we consider heavy, the Swiss metallers collectively agree that the nu-metal luminaries, Korn, served as their gateway to brutality.

Hammer decided to ask the band which songs made the most lasting impressions...

Erwin, bass: "To me this song is their best opening track. I remember buying Follow The Leader during my first trip to England. It’s still my favourite record and to me, one of the best metal releases of our generation."

Randy, vocals: "That intro is so special. When I’m listening to this song, I can picture my happy face 18 years ago when I heard this album for the first time."

Randy, vocals: "Oh God, I think that Life Is Peachy is one of the albums that I listened to the most. I still remember the day I bought this album. I put it in my record player and right away I was amazed by this song. This is also one of the songs that made me take a mic and start screaming in a band… actually, I practiced a lot on this song."

Randy, vocals: "Another hit from Life Is Peachy. This song still has a special vibe for me today even if I have a kind of bad memory about it. I think I was around 14 years old and I was so sick that I was continuously vomiting the whole night long.

"That album was playing on repeat during this entire time. Despite that, this song still is in my heart today and represents something special to me. When it starts playing, I directly get goose bumps."

Nicolas, guitar: "This got to be the first song I heard from Korn when I was a teenager. Right from the opening riff to the massive chorus I was blown away. This song was also my gateway to the metal world. After a few listen I began scouting the secondhand market to find an Ibanez seven string guitar.

"Being a lefty, it was a nightmare because only a handful were made worldwide at the time. Eventually I managed to score one in a shop in Paris where they agreed to ship it to Switzerland.

"I still have this guitar and I’ll probably never part ways with it. Issues, as a whole, had such a massive influence on me. To this day I still listen to this album on a regular basis."

5. Falling Away From Me

Erwin, bass: "The music video was streamed on a national Swiss television show called Garage and I still keep on watching it. That intro guitar lick with the delay shows how creative Head and Munky are. It may not be very technical but from a song writing point of view I think it is brilliant."

Randy, vocals: "This chorus is one of the best of the new album for me. I really like that middle part where you can feel the roots of the band, especially with the vocals. So tortured.

"I can really feel the blackness and sadness of this record. The lyrics are really breath taking and you can totally imagine the things that Jonathan Davis has to endure through this process."

Darryl, guitar: "When I was a teenager, I used to listen to a lot of US rap and some old school rock’n’roll. It was also a big transition in my music tastes because as time goes by, I was searching for something more aggressive.

"I started playing guitar in my 13’s and in order to discover new bands, I often went on Youtube to listen to some rock and metal mixtapes from random bands while playing online games.

"I needed to find music that put me in the right mood. I remember the day I discovered the song Right Now from Korn. That was the moment when I started enjoying nu-metal music, which I still love to listen to. Thanks to them and this song I discovered a lot of other great bands."

Dario. drums: "If I remember it well, this was the first song I’ve heard from Korn. I really dug it from the first play. The intro is still so iconic to me that when I hear the first cymbal hits, I immediately recognize the song and feel all its massive energy.

"It was as well one of the first metal song I learned to play on the drum-kit. David’s drum-play had a big influence on me when I started playing drums, but not to the point that I wear Calvin Klein underwear haha"

Nicolas, guitar: "I let a few Korn album slept under my radar because I was more into extreme genres but with this song they really made a strong come back in my musical journey.  I was really impressed by Ray Luzier’s playing. It really made the heavy guitar riff shine. As always with Korn the sound of the album is so massive. I really enjoyed the direction they went with this song and album."

Dario. drums: "If I had to choose one Korn album to take on a desert Island, that would be Follow The Leader. I listened to this album during all my teenage years, during hard and good times.

"Freak On A Leash is definitely my favourite song from this album. I love the heavy and aggressive side of this song, including the nicely managed dissonances. Listening to this song brings back vivid memories."

The follow up to the Swiss metallers' debut release, 2017's Purge and Purify, Acheron is a brutal aural assault of blackened melodic death metal.View Deal