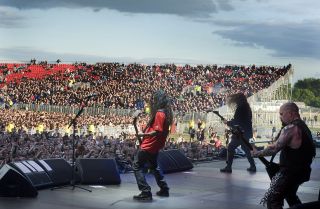 Slayer have been a mainstay of festival circuits for decades, providing their influential thrash metal to concert goers young and old.

But, In January 2018 they announced that they would embark on their final ever world tour, before calling it quits for good, with a final show on November 30, 2019 in California.

We're sure there are a million and one things we'll all miss about the thrash metal heavyweights but just to remind you, with a tear in our eyes, here's the main reasons we will never get over losing Slayer's live shows...

The shouts of SLAYYYYYAAARGGGHHHH soundtracking our tinnitus for hours afterwards. Is there a better band name to yell at the top of your voice? Nope.

They always have the best support acts. Their final UK tour they brought with them Lamb of God and Anthrax, and if it wasn't for Slayer nobody would have heard of Machine Fucking Head!

Remember when one of the Kardashians wore a Slayer tee and Gary Holt responded? We'll miss those bants.

That primal thrill EVERY TIME you hear the intro to Raining Blood.

That sense of being an army that’s unique to Slayer.

We'll miss casing the very best battle jackets. All those old school thrashers and their classic patches and impressive artwork, there's nothing like it.