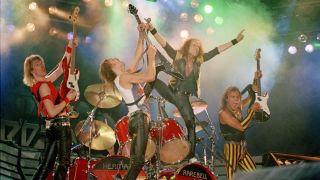 From human pyramids to forks over the eyes, the Scorpions have made such a strong impression on hard rock over a period of half-a-century that now it’s impossible to recall a time when they weren’t around.

Musically, they’ve had more than one distinct period. In the 70s, there was the Hendrix-inspired era, followed in the next decade by a style that became the template for million selling commercial hard rock. And they even went experimental for a while in the 90s!

But whatever they’ve turned their hand to, the Scorps have always retained a sense of individuality, even if sometimes they drove off the autobahn and crashed.

The Scorpions found themselves out of step with prevailing trends in the 90s, and floundered as a result. But the low point of their career came just nine years ago, with this misguided attempt to contemporise their sound.

Bringing in Midas-like songwriter/producer Desmond Child is understandable, although why they thought it necessary to enlist the help of Smashing Pumpkins mainman Billy Corgan and ex-Marilyn Manson guitarist John5, only Rudolf Schenker knows. The upshot was a chaotic, mess. If the plan was to prove their relevance, it backfired badly. The sole saving grace is that they never made Humanity: Hour 2.

A pop rock mess. While this band have always written huge anthems and intensely melodic songs, here they abandoned their well-honed approach, and the result was disastrous. This was a lightweight release, with scarcely any sign of riffs or guitar solos, and a strange reliance on keyboards, provided by producer Peter Wolf. To Be No. 1 was decent enough, but the rest of the material had the sniff of being Def Leppard cast offs. This was a classic band desperately attempting to be relevant – and falling flat.

At least this was a little better than Eye II Eye, but that’s hardly praise. The problem here was that the production was too smooth. Keith Olsen, renowned for his commercial instincts, was brought in, and he neutered the Scorps’ tendency to open up and really go for the throat.

The songs themselves aren’t at all bad, and you get the feeling that with a more sympathetic production Wild Child, You And I and Does Anyone Know? could have been outstanding, But here, they slither and flop. A wasted opportunity.

The debut Scorpions album, and a bit of a curio. It’s the only one they made with Michael Schenker as a full-time member. And, despite his youth, he was just 16 at the time, some of his solos here are remarkable. But overall, you can tell this was a very young band searching for a direction. This is very psychedelic, and it doesn’t really suit the band’s burgeoning talents. However, In Search Of The Peace Of Mind is impressive, and overall the album has a musical value.

While the band here began their trawl through contemporary trends, in order to fit in with what was happening, unlike subsequent attempts, this is actually quite enthralling. You’d never regard this as being close to the Scorps’ classic albums, but producer Bruce Fairbairn brought out the poppier side of the band without ditching the hammer blows they could wreak. And it also helped that the songs were more than reasonable. Alien Nation and Under The Same Sun had class and depth.

For once, the goal of updating the Scorpions’ sound to make it fit into the modern world actually almost worked. Unlike previous efforts, this time the band didn’t make the mistake of just scrapping everything they’d done previously and rushing headlong into a contemporary cul-de-sac.

A more thoughtful approach meant they kept the best elements from the 80s and finessed these. The Good Die Young featured a sparkling duet between Klaus Meine and Tarja Turunen, and the whole album hummed with purpose.

This is really where the Scorpions as we know them truly began. With Ulrich Roth coming in to replace Michael Schenker, the band opened up their horizons, combining Roth’s fascination (some might call it an obsession) with Hendrix and a sharper, harder sound.

You can hear how this worked on songs like Speedy’s Coming and the title track. The band had found their niche, and here they embraced it with feeling. This was British hard rock, but given an individual twist. Nobody else sounded quite like this.

The final album with Roth, and while it perhaps showed signs that the style which had helped them to break through internationally was becoming a little jaded, there are still some powerful moments. None more so than the mesmeric We’ll Burn The Sky. And The Sails Of Charon, plus the suggestive He’s A Woman, She’s A Man were also right up there with the best of the band’s output in this era. Controversy raged over the album artwork, but that was almost the norm for this lot.

Released on the back of a series of mediocre albums and unwise dabblings with ‘modern’ trends, Unbreakable thankfully saw the Scorpions returning to what they did best. Their original plan was to reunite with producer Dieter Dierk. And while that never materialised, the band still managed to come up with a set of straightforward, melodic hard rock anthems in the classic Scorpions tradition.

What really made it work was that they weren’t trying to be anything other than themselves on songs like New Generation, Someday Is Now and Remember The Good Times. The result: their best record for more than a decade.

In many respects Savage Amusement was the end of an era for the Scorpions, in that it was the last of their albums to be produced by Dieter Dierks and also their final album for the Harvest label. Released four years after Love At First Sting, it was a surprisingly low-key affair.

While it lacks any stone-cold Scorpions classics, Rhythm Of Love and Believe In Love both hold their own, even if the overly glossy production dates them inextricably to their time. But even if Savage Amusement did fall short of the band’s best material, it still managed to show that the Scorpions hadn’t completely lost their sting.

When the Scorpions announced they intended to revisit old ideas abandoned in the 80s and work them up into songs for a new album, it sounded very desperate. But against all expectations, the plan worked brilliantly.

Return To Forever was the Scorpions returning to what they do best, and coming up with a triumphant set of songs. The band sounded energised and excitable once more, and through We Built This House, House Of Cards and Going Out With A Bang, they roared again.

Aka ‘The One With Wind Of Change on it’. The band’s biggest hit, that song was either risible or inspirational, depending on your tolerance for lighters-in-the-air anthems about world peace delivered by whistling Germans. Beyond that freakishly successful single, Crazy World is the best Scorpions album of the 90s.

Crucially, the songs retained a strong connection to their past: the likes of Tease Me Please Me, Don’t Believe Her and Lust Or Love wouldn’t have sounded out of place on Animal Magnetism, and the sweeping Send Me An Angel is up there among the band’s finest ballads. There are one or two dips, but it doesn’t disgrace the band’s heritage.

Their first album with Dieter Dierks producing, and the one with which the band moved away from their early psychedelic leanings. It’s squarely planted in the world of mid-70s hard rock, with Roth’s virtuoso guitar pyrotechnics a vital counterpoint to the more commercial leanings.

Top Of The Bill celebrates life on the road, and Night Lights allows Roth to show off his chops. But there are some evocative moments too: the title track is the sound of a band who haven’t fully shed their psychedelic skin, while Robot Man is eerily effective. In Trance was also the first album to feature what is now the unmistakable Scorpions logo

It’s tough to get past the controversial and, frankly, ill advised sleeve, but musically Virgin Killer is probably the Scorpions’ greatest 70s album. The material was consistently stronger than at any other point during Roth’s tenure with the band, as proved by the number of songs that would become major live favourites in the ensuing years.

Catch Your Train and the dynamic Picture Life positively gallop along, while Polar Nights enable Roth to stretch his creative muscles and show that there was more to him than rehashed Hendrix licks. This album was a key step in the Scorpions’ musical development.

At the time, the controversy surrounding yet another provocative cover distracted from the music. Animal Magnetism also suffered from being sandwiched between their standout albums, Lovedrive and Blackout.

But there’s much to recommend: The Zoo, with its menacing rhythm, is an all-time Scorpions classic; Make It Real is an electrifying anthem; and Don’t Make No Promises (Your Body Can’t Keep) picks up where the equally lurid Another Piece Of Meat from Lovedrive left off. Throw in the Zeppelin-esque stylings of the title track, and you’re left with an unfairly under-appreciated album.

Exit Uli Jon Roth, enter Matthias Jabs for the album which found the Scorpions embracing the slick hard rock approach with which they made their name. With Jabs on board (and, on Coast To Coast, Michael Schenker guesting), the songs were sharper and shorter, as well as a little less reliant on extensive guitar solos than during the Roth era.

Dovetailing perfectly with what peers like AC/DC, Aerosmith and Ted Nugent were doing at the time, the Scorpions added arena sparkle to the title track, Another Piece Of Meat and Can’t Get Enough, and the soft-centred Holiday brought another vital element to the band’s armoury: the big, weepy ballad

Love At First Sting is packed with high-quality songs that struck a chord with the US market but retained their European roots, and the party metal of Bad Boys Running Wild, fan tribute Coming Home and the heartfelt ballad Still Loving You proved to be winners not only on record but on stage as well.

After half a decade on the cusp, this was the album that marked the band becoming major international players. As they eased into the 80s, the Scorpions became confident and comfortable with the demands of the era.

From the moment that instantly recognisable staccato riff ushers in the title track, there’s not a wasted moment: the pop rock sensibility of No One Like You, the Eastern-tinged inflections of China White, the epic balladry of When The Smoke Is Going Down, and thunderous set-closer Dynamite. Even more remarkable is that Meine was suffering potentially career ending throat problems when they recorded it.

10 of the best rock bands from Germany