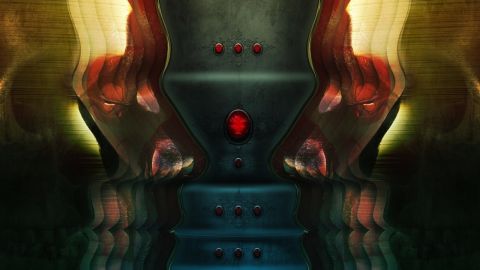 Alot can happen in eight years. Words can be forgiven and bridges can be rebuilt. Sometimes it is as they say: time can be a great healer. As

Prey For Me is a promising start, with pounding staccato triplets unravelling into that signature bounce Korn have perfected over the years, if not invented as pioneers of their movement. Straight off the bat, there are flickers of electronic trickery providing the first sign that the experimentation on their last album, The Path Of Totality, wasn’t just a one-off. Love & Meth revisits the darkness and introspection explored on Issues, while What We Do echoes the catchiness of Untouchables before suddenly detonating into a syncopated, mechanised pulse.

Already The Paradigm Shift feels like a mish-mash of all the things that made Korn great over the years, smoking any expectations of the band returning to their mid-90s roots for a more undiluted twin-guitar assault. Instead, there are keyboards all over the shop, bringing new directions to parts that could easily have just been doubled up with guitars, and that is precisely what makes the album so unexpectedly brilliant. Even more importantly, the Californians still exude a mastery in crafting monolithic slabs of contemporary metal that are as anthemic as they are heavy. Imagine going to a metal club night that didn’t play Korn. Exactly.

With thundering grooves that could have been lifted straight off Issues, Mass Hysteria is a dystopian symphony of disaffection and isolation, and very much the sound of a band on top of their game. It’s understandable why the ecstasy-fuelled synthetics of lead single Never Never left a few fans scratching their heads, especially those who expected Head’s return to mark for a more purist approach for the band, but in context of the album it’s a summery breeze of euphoria and actually one of the standout tracks. The subdued, mid-tempo magnificence of Lullaby For A Sadist allows Jonathan Davis to absorb us into the black night of his soul, a place where rays of light seldom threaten to break the dark clouds.

Korn are clearly embracing their own evolution and instead of coming full circle, they’ve taken another step into the unknown. It may very well be that the secret behind their prolonged career is that this band have never lacked creative momentum and were daring enough to gamble when others weren’t, and therefore remained largely unaffected by the nu metal armageddon.

In The Paradigm Shift, Korn have served us one staggeringly potent curveball and this particular reunion heralds their return to form as a band that were – and continue to be – light years ahead of their contemporaries.