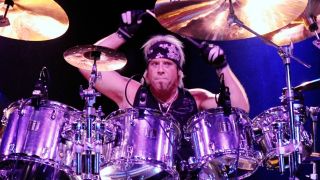 The pair will join the band next month following the departures of guitarist Nicholas ‘Blaze’ Baum and bassist Bobbie Crane last week. Perry has worked with several bands over his career, including Talas, Heaven and Lita Ford, while Lang performs in hard rock band Y&T.

Blotzer says: “Starting September 3 and 4 onward will be the great Mitch Perry on lead guitar, Stacey Blades on rhythm and lead guitar, Brad Lang on bass, the awesome Joshua Alan still fronting and yours truly chopping wood behind the kit.

“All these guys are longtime road veterans from very well-known bands. We’re definitely looking forward to playing with them.

“As always, the shows over the weekend are a testament to the people that love Ratt music – as performed by us with intensity and with great replication, which puts emphasis on the integrity that Ratt music should be treated with.”

The drummer had previously hinted that there were some issues within the band.

Blotzer told ClassX Radio: “Men have to become boys. They’d better grow up real quick here, because there are a lot of sailors out there that would give their leg to go out on this ship.

“I’m so proud of us, but I also wanna see people having their act together on every level. That includes me, too. Nobody’s immune from what we’ve got to do out there.

“I’m doing all the work behind the scenes, and these cats, all they’ve got to do is show up and do their part.”

But he suggested that he’d wait until the legal process over the band name has played out, adding: “Good things come to those who wait. And we’ll see what happens.”

Blotzer’s Ratt continue their Re-Invasion tour, with a number of US shows planned over the coming months.