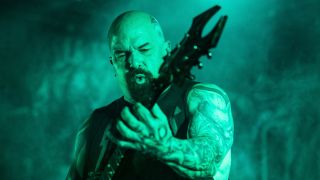 Slayer’s Kerry King has revealed that the thrash giants sometimes warm up for a show by singing along to “stupid shit” like Dewey Cox songs.

The guitarist says that while he prefers to stretch and ease his way through his own preparation for a gig, frontman Tom Araya enjoys a comedy soundtrack, such as that from 2007 movie Walk Hard: The Dewey Cox Story.

Asked what he does to prepare for a show like last night’s (Sunday) headline slot at Bloodstock, King tells Metal Hammer: “It’s usually silent unless Tom is playing something stupid like Dewey Cox or something. We play funny shit like that. He’ll have it playing in the hallway between rooms and we’ll sing Dewey Cox songs while we’re warming up.

“I warm up about an hour prior and get my stage gear on a half hour prior. Getting everything stretched…I do like to put on a show still and I’d hate to not stretch and get something in my body pissed off at me so I couldn’t put on a show for 10 days. That would drive me nuts.”

King also reveals that he has as many as nine unreleased tracks in the bag, left over from the sessions for latest album Repentless.

He adds: “I think I never really got out of writing mode for the last record. There’s so much extra material already recorded. There are seven, eight or nine extra songs with guitar, drums and bass.

“They are just sitting there and as long as lyrics don’t change them musically, they’re done. Slayer’s never been in that position, but I wrote so much stuff.”

The full interview with Kerry King will appear on an upcoming episode of the Metal Hammer: In Residence podcast on Spotify.