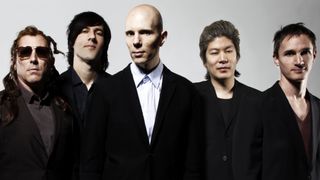 A Perfect Circle will tour in 2017 and are working on new music, according to mainmen Billy Howerdel and Maynard James Keenan.

Guitarist Howerdel was moderating the Los Angeles leg of singer Keenan’s A Perfect Union Of Contrary Things book tour this week when, according to Pulse Of Radio (via Blabbermouth), Howerdel said A Perfect Circle will tour in 2017 and that they are working on new material.

Keenan reportedly agreed and added that they would play at the Hollywood Bowl on May 7 of next year.

The band’s most recent album was 2004’s Emotive, which was made up mainly of cover versions. They last played live in 2013.

Keenan has been busy with his bad Puscifer while Tool are supposedly working on the long-awaited follow-up to 2006 album 10,000 Days.

The vocalist recently said he wasn’t being lazy in regards to new Tool music. He said: “We’re working on it. Do I appear to you to be a lazy person who doesn’t want to get that done?”

Last year, Keenan described Tool fanatics as “insufferable” for not understanding the humour in their music.